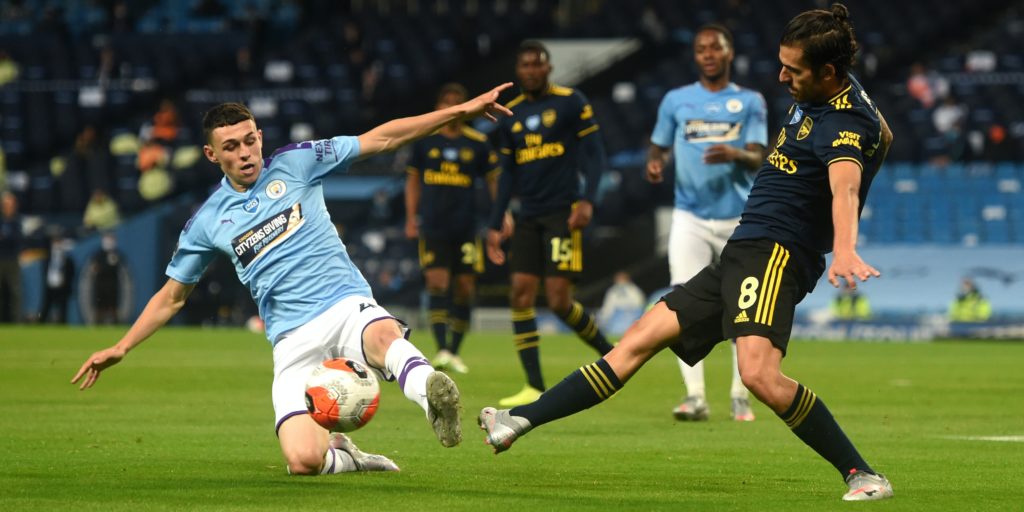 Manchester City turned on the style to beat Arsenal while a bizarre goal-line technology error denied Sheffield United at Aston Villa as the Premier League came back behind closed doors on Wednesday evening.

Wearing ‘Black Lives Matter’ on the back of their shirts instead of their names, all players, plus officials, on the pitch prior to kick-off in both fixtures took a knee in support of the movement.

Following City’s 3-0 win against Arsenal later that day, manager Pep Guardiola said: “White people should apologise, say sorry for the way we have treated black people in the last 400 years, for centuries.”

If the lack of a crowd was eerie as the top-flight returned 100 days after it was halted because of coronavirus, there was a familiar feeling in City’s dominance at the Etihad Stadium and a slice of controversy at Villa Park.

David Luiz had a calamitous outing after coming on as a first-half substitute, allowing Raheem Sterling to fire home moments before the interval, after which the Brazilian saw red for tugging down Riyad Mahrez in the box.

Kevin De Bruyne slotted home the 51st-minute spot-kick and substitute Phil Foden scored in stoppage-time on a night where goal celebrations were muted, with the players gathering for fist pumps but little else.

City’s victory meant Liverpool cannot seal the title at Everton this weekend, even though it remains a matter of when rather than if the Premier League trophy leaves the Etihad Stadium for Anfield.

Guardiola said: “Absolutely we can get better. We have respect for Arsenal because we know exactly what they want to do but it was little bit of a mystery to know how the team (would be) after more than two months out.”

The the match was not without problems for City as Eric Garcia, a surprise starter, left the field on a stretcher late on, having had lengthy treatment following a thumping collision with team-mate Ederson.

“We are concerned about Eric,” Guardiola said. “He is conscious, but I think he is going to be tested tonight because a kick in the head is always so dangerous.”

Arsenal midfielder Granit Xhaka also left on a stretcher after an early injury, while Pablo Mari pulled up midway through the first half as he also saw his return to action halted.

“They are getting assessed at the moment and we will know something more probably tomorrow morning,” Arsenal boss Mikel Arteta said. “Pablo’s one did not look really good, to be fair.”

Sheffield United should have been celebrating a win at struggling Aston Villa, who moved within one point of safety after a goalless draw where a technical fault denied the Blades an obvious goal.

Hawk-Eye, which runs the technology, issued a statement apologising for the error, saying the fact goalkeeper Nyland, Keinan Davis and the post were in the way meant no camera saw the ball cross the line.

But Sheffield United boss Chris Wilder said: “I don’t know whether to laugh or cry.

“Already the jokes have started, I’ve just seen Del Boy with a Hawk-Eye watch on. It’s all going to come out but we’re pretty disappointed and we’ve got to get on with it.

“I believe a decision should have been made from Stockley Park (the VAR centre). For someone to tell me with seven cameras and this is the first time it’s happened in over 9,000 games it’s a difficult one to take.”

It was the only serious flashpoint for United as they struggled to impose themselves on a Villa side who, for all their effort, lacked cutting edge.

Aston Villa head coach Dean Smith said: “There’s always going to be some error, we have human error from officials and we have to accept that. We’re the ones who go away disappointed even with that controversy.”