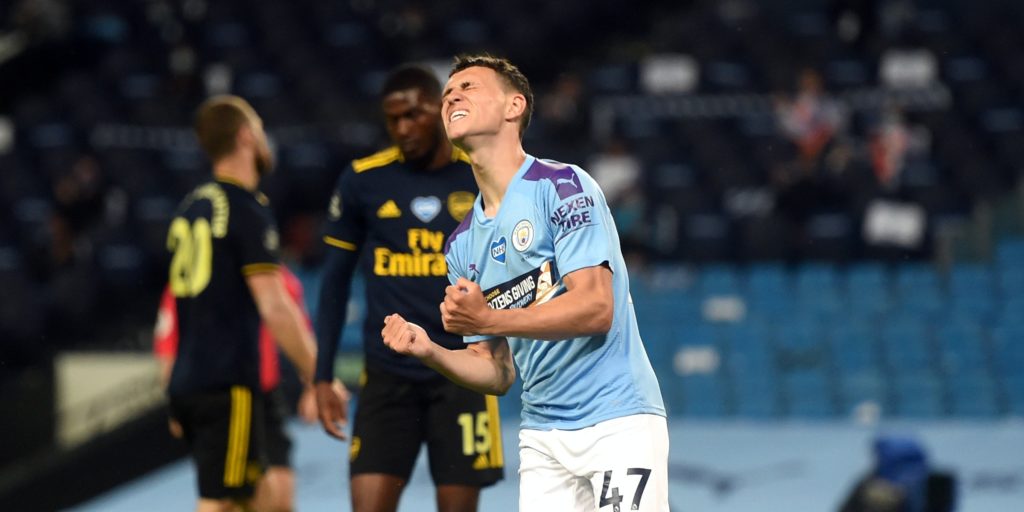 Foden wrapped up a 3-0 win after being brought off the bench at the empty Etihad Stadium.

Phil Foden is ready to seize his opportunity as Pep Guardiola looks to rotate his squad on the back of Manchester City’s impressive return to action against Arsenal.

The Premier League made its long awaited return on Wednesday evening, with the reigning champions delaying Liverpool’s coronation with a thumping 3-0 victory against Mikel Arteta’s Gunners.

Raheem Sterling broke the deadlock on the stroke of half-time after an error by substitute David Luiz, who would be sent off early in the second half for giving away a penalty that Kevin De Bruyne fired home.

Foden wrapped up a 3-0 win after being brought off the bench at the empty Etihad Stadium, with the 20-year-old sure to get more opportunities as Guardiola rotates his squad in an attempt to cope with the rigours of such a demanding schedule.

“Of course it wasn’t going to be at 100 per cent but I think we’ve been training really hard to try and get back into it,” the England Under-21 international said.

“You could see today there was a lot of changes and I think that’s going to be the way forward for the next couple of games.

“Every player is going to be needed and everyone needs to be ready to come on.

“But I think our fitness levels were OK today. I thought we pressed high and looked like the City that everyone knows.

“The boss said everyone needs to be ready because not everyone can play every game now, full 90 minutes.

“Everyone’s needs to be ready. He’s going to rotate a lot so everyone just needs to take their chance.

“I’ll be ready for whenever I play and try and do my best.”

Foden was brought on in the 65th minute against Arsenal and could well get a starting role against Burnley on Monday, when City will once again step out in front of empty stands due to Covid-19.

“It effects the game a lot,” he said. “When you’re down and the team are on the attack, you need your fans behind you to boost you again.

“It has to come from ourselves and people on the touchline, and captains and leaders talking us through the game.

“It’s going to be difficult without our fans in the next couple of games but I know we’re capable of winning and we’ve all got voices, so we need to use them.”

The only negative on City’s return to action after 101 days was a serious-looking injury sustained by Eric Garcia.

The 19-year-old defender was taken to hospital after receiving lengthy treatment at the stadium following a heavy collision with goalkeeper Ederson Moraes, with City announcing on Thursday afternoon that he had been released and would be monitored in the coming days.

“No-one’s seen him after the game but I’ve asked the doctor and he said he’s doing well at the moment, so hopefully nothing serious has happened,” Foden told City TV.

“I think he’s going for a scan to see if anything’s broken and things, but it looks good at the moment so fingers crossed.”

City defender Aymeric Laporte said on Thursday that Garcia is OK and “just needs a couple days to rest but he will be fine soon enough”.

Ederson also shared a photo of himself alongside the defender with the caption “well and back”.

City said in a statement: “Eric Garcia has been released from hospital after suffering an injury during last night’s Premier League win over Arsenal.

“Eric was taken to Manchester Royal Infirmary Hospital after the game as a precaution for further tests. He will be monitored in the coming days, ahead of a return to training and competitive action.”