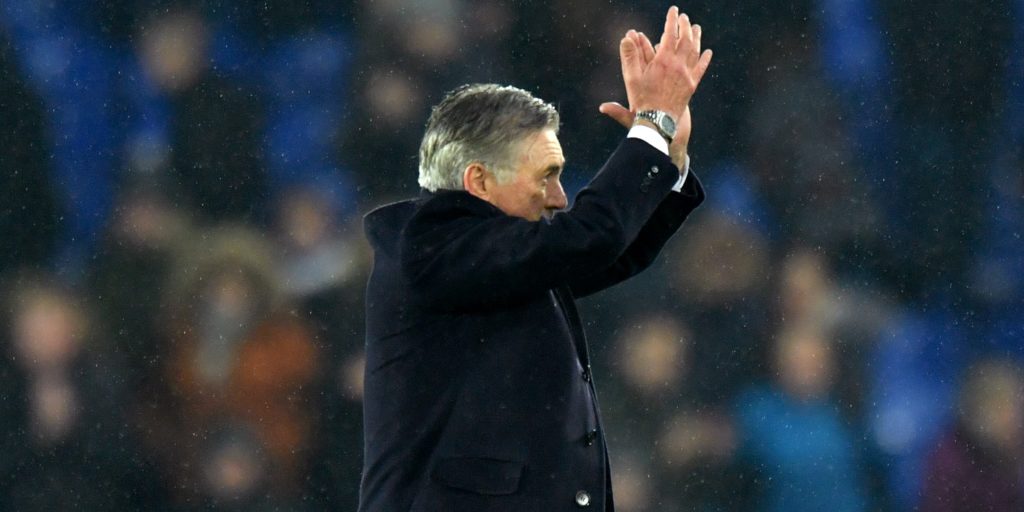 The Italian admitted he could not predict how his players would react to the empty stands.

Carlo Ancelotti is grateful that Sunday’s Merseyside derby will be played at Goodison Park even if the lack of fans might rob Everton of any home advantage.

Confirmation that Goodison will host the match only came last week after fears that fans could breach social distancing regulations to congregate around the stadium – particularly if it had remained possible that Liverpool could clinch the league title for the first time in 30 years with a win.

“Everyone in football says our supporters are the 12th man, but we have to respect the procedure.”

The Italian admitted he could not predict how his players would react to the empty stands, but said that just because the fans were not there, his players would not feel the expectation to perform in a derby any less.

“We know it is not a normal game,” he said. “Everyone in the world knows how the fans look for this game. We know really well what we have to do. We have to play a perfect game showing, character, sacrifice and personality.”

Liverpool’s hopes of potentially clinching the title on Everton turf were dashed by Manchester City’s midweek win over Arsenal, but Ancelotti said that changed nothing as far as he was concerned.

“Our goals are not about the goals of Liverpool,” he said. “We have to do our best to reach a good position in the table and if possible to play in Europe next season, so we are not focused on what Liverpool are doing.

“If they cannot win the title at our home, this doesn’t matter for us. What matters is points to improve our position.”

The lockdown has not been kind to Everton on the injury front, with Jean-Philippe Gbamin suffering an Achilles injury which will rule him out for another four to five months, while Theo Walcott has had surgery on an abdominal problem.

Yerry Mina and Fabian Delph have also suffered problems in training which will rule them out on Sunday.

But Ancelotti said the rest of his squad had prepared well and would be ready for the intensity of a derby.

“The other players are fit, in a good condition and motivated,” he said. “When you come back from a long period five weeks is not a lot of time, but I think the physical condition is good enough to play a good game.”

The long period without games has given Ancelotti more time to assess things at Everton after taking over in late December and going straight into the busy festive period, but he said he had not used the time to make any tactical changes.

“In this period we were in contact with the players showing them some video and giving them physical training to do at home but nothing special,” he said.

“We are not going to change our strategy or our style. Until the end of the season we will follow the style from the games before the lockdown.”