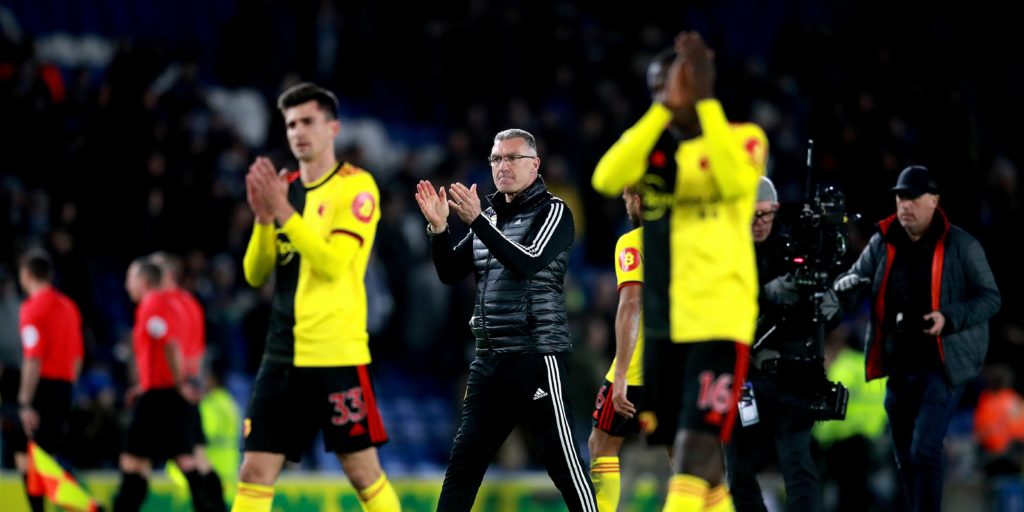 The Hornets resume their battle against relegation on Saturday.

Watford boss Nigel Pearson insists his players will not be caught cold as they return to action following the enforced Premier League break.

The Hornets welcome Leicester to Vicarage Road in Saturday’s early kick-off and sit just one place above the relegation zone on goal difference.

They lost at Crystal Palace before the coronavirus pandemic saw the season halted but their last home game was a shock 3-0 victory over champions-elect Liverpool.

Pearson knows that playing in front of an empty stadium means it will be impossible to replicate the feel of that evening but has backed his players to be quick out of the blocks 105 days since their last outing.

“It is going to be difficult without our fans to rekindle the atmosphere,” he said.

“We can’t rekindle that atmosphere, but I don’t think we have lost anything from being away. We have kept in contact with each other player-wise.

“Staff have kept in contact. We have had a really good network of support for the players, which has been very important, and likewise for the staff.

“I think we get the balance right between having a bit of fun and working very hard, and making sure people fully understand what is expected of them.”

Pearson will be unable to call on injured trio Daryl Janmaat, Gerard Deulofeu and Isaac Success but the former Leicester boss is pleased with his options.

“The players came back in good condition,” he added.

“We had players who re-joined at different stages based on their own feelings, but during that time some of those players had one-to-one sessions so they were integrated back in.

“We’ve at least had the last two weeks where the squad have really been together, and it’s allowed us to work at a pace where we think we’re as prepared as we can be given the circumstances.”