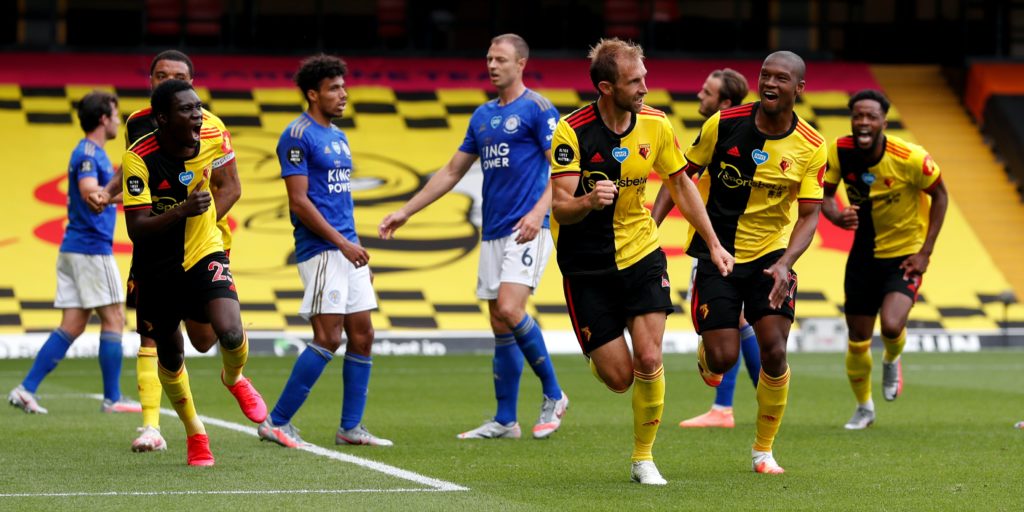 Ben Chilwell’s brilliant strike put the visitors ahead at the start of stoppage time.

Craig Dawson’s first Watford goal earned a last-gasp point for the relegation-threatened Hornets as they deservedly held Leicester to a 1-1 draw at Vicarage Road.

With Ben Chilwell’s brilliant strike putting the visitors ahead at the start of stoppage time, Watford were still able to find an equaliser as Dawson’s acrobatic finish saw both side’s first game back finish in a thrilling 1-1 draw.

Kicking off early, Nigel Pearson’s side were above the bottom three on goal difference alone and the point could yet prove vital.

Marc Albrighton had earlier hit the crossbar for the visitors, while Kasper Schmeichel was forced into some smart saves as Watford looked to pull themselves clear of the relegation zone.

Jamie Vardy, seeking his 100th Premier League goal, would have the first decent effort of the game, benefiting from poor defending from Christian Kabasele to break through and fire wide of Ben Foster’s left-hand post.

As with most of the games since the restart, the intensity of a usual Premier League encounter was lacking in the opening stages, Wilfred Ndidi bending an effort wide just before the half-hour mark.

Up to that point Watford had failed to have a shot of note on Schmeichel’s goal, restricted to crosses into the box which were well dealt with by the Leicester back-line.

Abdoulaye Doucoure was gifted a chance following a mistake from Ndidi, with Schmeichel making a fine save with his legs to spare the blushes of his team-mate.

Watford should have gone in ahead at the break, Etienne Capoue’s fizzing pass led to Sarr crossing to the back-post where Kabasele and Roberto Pereyra got in each other’s way and the chance was lost.

Unperturbed, Watford remained on top at the start of the second-half, Schmeichel again doing well as this time he denied Sarr after the winger had burst onto another fine Capoue pass.

Deeney then nodded a cross inches wide while Caglar Soyuncu should have done better with a header of his own for the Foxes from a James Maddison free-kick.

Leicester were now the side most likely to score, Albrighton rattling a strike against the woodwork before Foster got down well to keep out Maddison immediately afterwards.

Chilwell then thought he had won it for Leicester, finishing superbly from a tight angle as the clock ticked into added time.

But Watford rallied and Dawson was able to score with an overhead kick as a late corner deflected into his path.