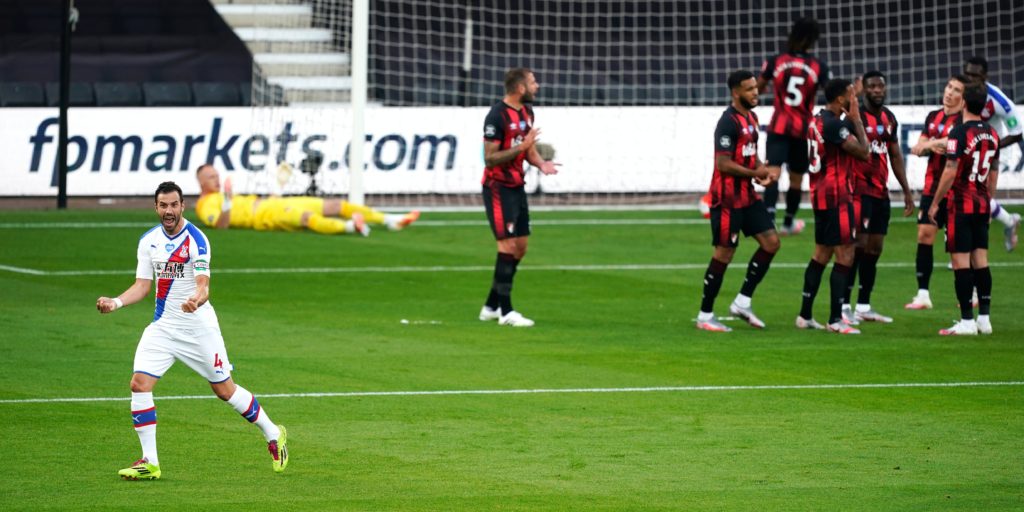 Luka Milivojevic scored a wonderful free-kick on the south coast to guide the Eagles to their fourth successive league win.

Bournemouth’s relegation fears increased after Crystal Palace secured a comfortable 2-0 win at the Vitality Stadium thanks to goals from captain Luka Milivojevic and Jordan Ayew.

The first Premier League fixture broadcast live on the BBC was one to forget for Eddie Howe’s side, who suffered a fourth defeat in five games.

It leaves the Cherries in the bottom three and with a tricky run of matches to come, the future looks bleak for the south coast club.

For Roy Hodgson’s Palace, they made it four straight victories – albeit the most recent before this was 105 days ago – with a professional display to throw their name into the hat when it comes to European qualification.

The return of David Brooks after a year out gave the hosts a boost before kick-off and he looked lively from the outset.

Palace were able to settle quickly though and picked up where they left off before the suspension of football by going ahead in the 12th minute.

Wilfried Zaha – not long after curling over – won a free-kick after contact from Brooks and it provided Milivojevic with the chance to open the scoring.

The Serbian curled over the wall and despite Aaron Ramsdale getting a hand to it, the shot hit the crossbar and went in for the first top-flight goal shown live on the BBC since March 1988.

Bournemouth responded initially with Callum Wilson heading over Brooks’ cross but by the midway point of the first half the Eagles had extended their advantage.

Zaha spotted the overlapping run of Patrick Van Aanholt on the left and he found Ayew, who side-footed home in the 23rd minute for his ninth goal of the season.

Despite netting for the third consecutive game, the Eagles striker was becoming increasingly frustrated with referee Stuart Attwell and received a caution just before half-time.

Howe had seen enough and introduced Arnaut Danjuma in place of Harry Wilson during the break, but was forced into another change early in the second period when Joshua King had to be replaced by Dominic Solanke.

King injured his ankle after a strong challenge by Gary Cahill, which was reviewed by video assistant referee but not deemed a red card.

Brooks’ return from a long-term ankle injury lasted just past the hour mark but after suffering cramp he was withdrawn with Junior Stanislas taking his place, and it was the substitute’s corner which saw Nathan Ake head straight at Vicente Guaita.

The 63rd-minute effort was Bournemouth’s first on target, although it was not the beginning of a recovery.

Palace continued to keep the hosts at bay and moved above Arsenal with a fourth successive clean sheet ahead of their visit to Liverpool on Wednesday.