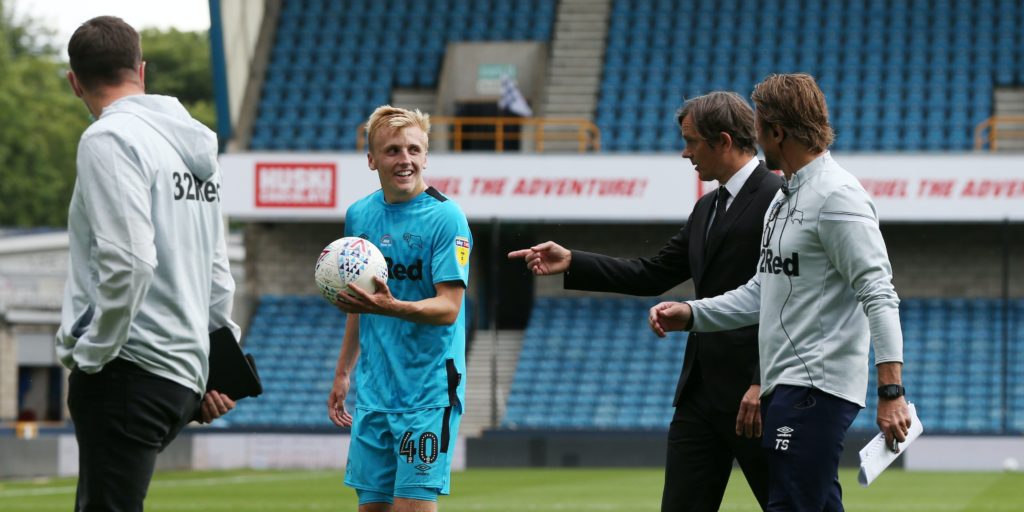 Derby boss Phillip Cocu hailed a “complete” performance from teenage hat-trick hero Louie Sibley after his side earned a 3-2 win over Millwall at the Den.

Eighteen-year-old Sibley, making only the second league start of his career, scored a magnificent solo goal to cancel out Matt Smith’s first-half opener.

The Rams academy product slotted home a second with 20 minutes to play and wrapped up the points in closing stages.

“He played a massive game,” said Cocu. “Not only the way he played, but his total development as a young player is a real positive for us as a club.

“He scored great quality goals, a very complete game in his position. When we don’t have possession he does his job, he works for the team.

“Apart from the football we played, we also showed again that mentally we are a strong side. We have confidence in our way of playing the game, we know we’re going to be able to score one or two goals.

“The first time they really came close to our goal, they scored. And that’s hard. We’d been really good, and then they get the goal.

“Some parts of the season we’d struggled in that aspect but we’ve improved a lot – confidence in the team and each other is high, and we showed that again.”

Smith powered his header past Ben Hamer on 15 minutes but Cocu’s men got even midway through the half as Sibley twisted past two defenders and held off a third before firing high into the net.

The game looked as if it was drifting towards a draw in the second half until Sibley provided another moment of magic, finishing coolly past Bartosz Bialkowski.

Sibley later took advantage of the space left in behind to complete his treble. Jon Dadi Bodvarsson pulled one back in stoppage time, but it was too little too late.

“We’re a team that thrives off the energy of the crowd in certain moments in the game,” said Millwall boss Gary Rowett. “And I think we found it hard when the game felt flat. Derby navigated it better than us, with their technical players and slow build-up play.

“We started OK, scored a very good goal, we broke well, pinched it in midfield and showed good composure to put a good ball in for Matt Smith.

“But after that we conceded two very poor goals in my opinion. They were well taken by Sibley, and I’m sure Derby will be delighted with them, but they were very poor, very soft.

“It was their goal kick when the drinks break got called. I spoke to the referee about it at half-time, because as we ran on after the break he blew the whistle and they just carried on.