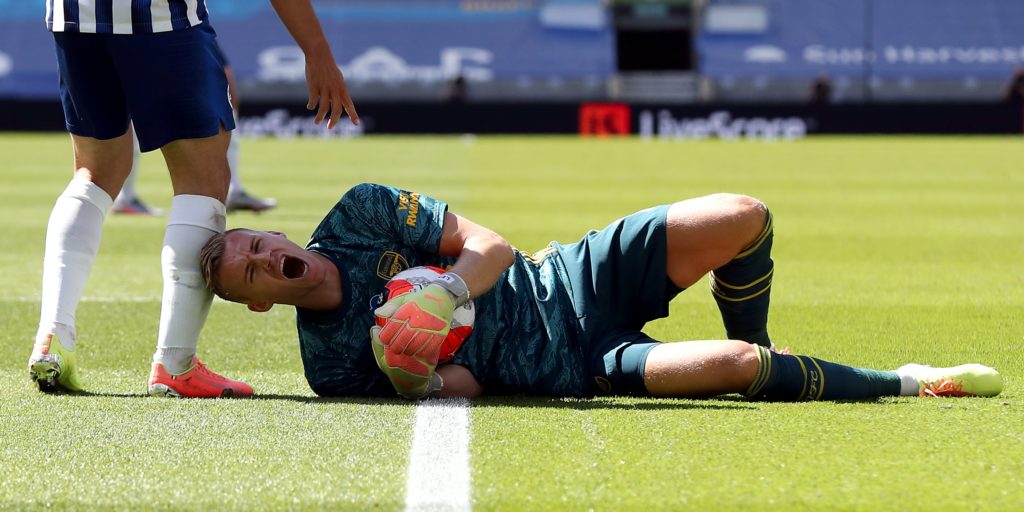 Martinez replaced Leno in goal for Arsenal during the 2-1 defeat at Brighton.

Emiliano Martinez is likely to finish the season as Arsenal’s first-choice goalkeeper but insists he is gutted by the injury suffered by team-mate Bernd Leno.

The Gunners lost 2-1 at Brighton on Saturday to a last-gasp Neal Maupay goal, with the striker involved in an earlier incident which saw Leno taken off on a stretcher.

The Germany international seemed to suffer a knee injury and left the Amex Stadium wearing a brace and using crutches.

The PA news agency understands Leno will be fully assessed in the coming days before the extent of the injury will be known.

Leno’s injury adds to a growing list of fitness concerns for head coach Mikel Arteta, who has seen his side lose both games since the Premier League restart, with both Pablo Mari and Granit Xhaka forced off in Wednesday’s defeat at Manchester City.

Fellow goalkeepers, including David De Gea of Manchester United and international colleague Kevin Trapp, sent messages of support to Leno on social media, while Martinez was also sad to see his team-mate hurt.

“In the goalkeepers’ union, you don’t want the other goalies to get injured because it can happen to anyone,” he told arsenal.com

“We train every day together, we support each other, we’re really close, we even have a WhatsApp group for just me, Bernd and Matt (Macey) – it is devastating to be honest.

“I wish him a speedy recovery and if he needs the rest of the season, me and Matt will try to do a good job in the Premier League and try to cover him as much possible.”

Martinez has played the role of back-up goalkeeper this season following the retirement of Petr Cech last summer.

He has appeared in the Europa League and Carabao Cup but made a long-awaited return to the Premier League – even if the day did not go how he planned as Maupay’s goal completed the comeback for the Seagulls after Lewis Dunk’s scrambled equaliser had cancelled out Nicolas Pepe’s strike.

“The last time I played in the Premier League was three years ago,” added Martinez.

“But I wasn’t thinking about it when I just came on. I made a save straight afterwards but I am so disappointed for the result, I thought we deserved to be 2-0 or 3-0 up. But you just take it and learn from it.”

The victory for Brighton was their first of the calendar year as Graham Potter’s side battle against the drop.

Captain Dunk started the comeback with a close-range leveller and the England international felt the forced postponement of the season due to the coronavirus pandemic has given Brighton a chance to re-evaluate.

“It’s a huge win for us,” he told the club’s official website.

“Our first this year, so they have been hard to come by but we worked hard during the last few weeks.

“To come from behind to get the three points was a great feeling for everyone. We pressed the reset button today and it’s worked.”