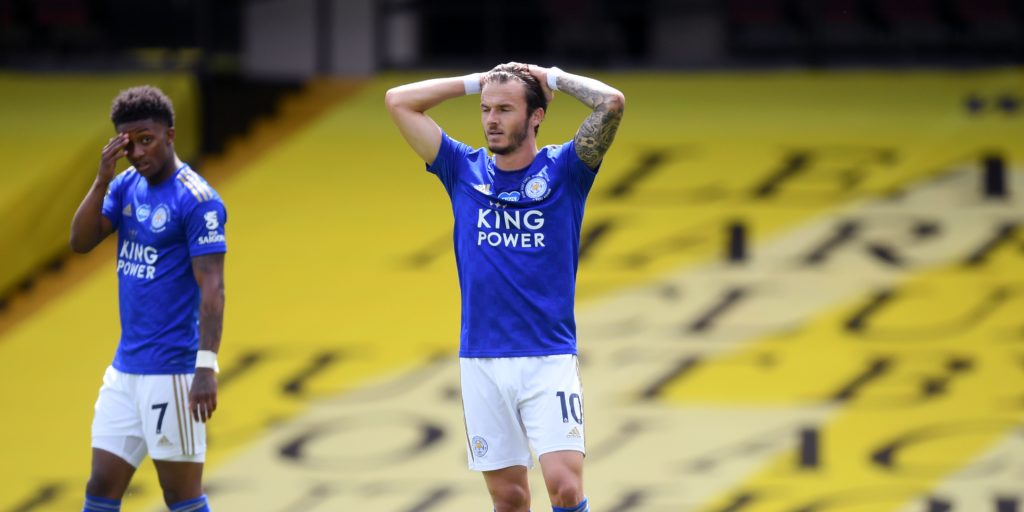 Leicester midfielder James Maddison admits his joy at returning to Premier League action was short-lived as Watford earned a last-gasp point against the Foxes on Saturday.

When fellow England international Ben Chilwell put Leicester ahead at Vicarage Road in the 90th minute, Maddison and his team-mates must have thought they were on course to begin Project Restart with a bang.

Instead, relegation-threatened Watford went up the other end and Craig Dawson acrobatically turned home his first goal for the Hornets to secure a 1-1 draw for Nigel Pearson’s men.

While the season will be finished behind closed doors due to the ongoing coronavirus pandemic, Maddison was pleased to be back in action over 100 days since Leicester’s last outing – even if it did not end the way he would have liked.

“I’m so happy, playing with a smile on my face, back doing what we love,” he told lcfc.com.

“Obviously, I’m so excited and happy to be back but then straight away, I’m so disappointed that we missed out on two points because that’s the game.

“We’re so hungry to do well and secure that Champions League space. So, (it is) kind of two points dropped, I feel, but I felt good and I felt strong even towards the end. I could have had a goal or an assist on another day.

“Obviously, the first one back is always going to be strange, a bit ropey, a bit cagey in the first 10 minutes.

“But I think over the 90 minutes, we were definitely the fitter, more dominant team and created the better chances.”

For Watford, battling back for a late share of the spoils could prove vital in their fight against the drop.

They resumed their campaign outside the relegation zone on goal difference alone so any points at this stage are vital and Dawson praised the players for rallying back against high-flying Leicester.

“It was hard to take that goal, conceding so late in the game, but it was great team spirit to go up the other end and score,” he said.

“You could really feel the spirit of the ground and we are going to need that in the upcoming fixtures.

“It was obviously a shame the fans weren’t here but the lads played a great game and hopefully we can continue to do that.

“Leicester are a great side, take nothing away from them, but it was also getting used to the surroundings and the situation we have got at the minute and I think we did well towards the end.”