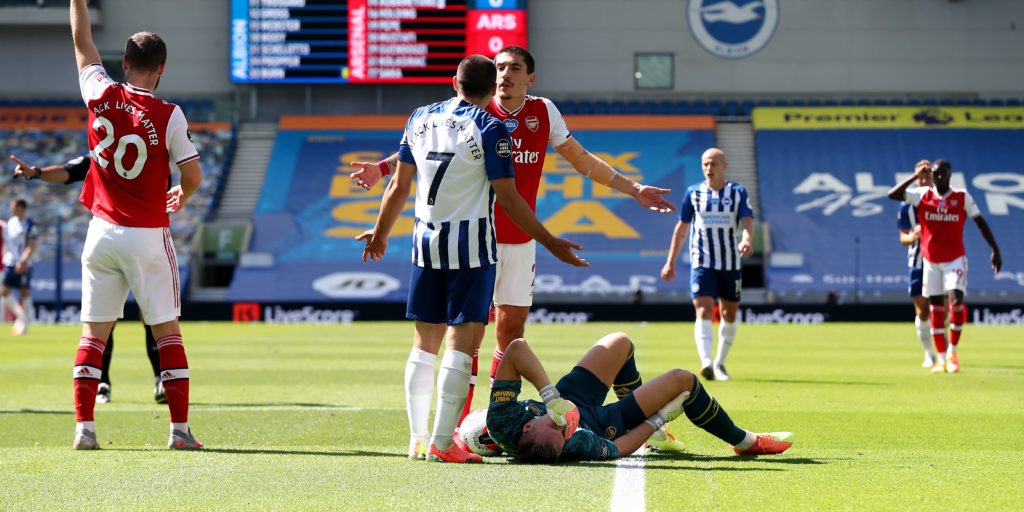 Brighton take on Leicester on Tuesday.

Brighton manager Graham Potter has defended Neal Maupay over his role in Bernd Leno’s injury and believes the striker will continue to improve following his match-winning goal against Arsenal on Saturday.

The 23-year-old’s injury-time strike moved the Seagulls five points clear of the relegation zone following their comeback 2-1 win at the Amex Stadium.

Maupay apologised for his role in goalkeeper Leno’s injury after the German was carried off on a stretcher in the first half with a serious-looking knee problem and reacted angrily towards the Brighton striker.

Tempers ran high at full-time, with Arsenal’s Matteo Guendouzi appearing to put his hand on Maupay, although the midfielder escaped a Football Association charge.

Maupay told BT Sport after the match: “Arsenal players need to learn humility, maybe sometimes. They have been talking a lot first half, second half when they were 1-0 up. They got what they deserved.”

“He wants to do well for himself and for us and his team-mates, you can see that in how he plays the game.

“He sacrifices himself a lot, runs for the team a lot, and still tries to score in the Premier League – it’s not easy, especially in your first season.

“He’s adapted really well and we are happy with him and I think he will get better and better.”

Potter says he has not said anything to Maupay about the injury to Leno, where the Frenchman nudged the goalkeeper who then landed awkwardly.

He added: “It is an incident that is unfortunate, can happen on a football pitch – an innocuous coming together.

“As much as Neal is a competitor, he doesn’t want to go out there and injure people on purpose. We wish the player a speedy recovery but unfortunately these things happen on the football pitch.”

Brighton travel to Leicester on Tuesday for their first away match since the restart. The Champions League-chasing Foxes were held to a 1-1 draw at Watford on Saturday.

Jamie Vardy remains one goal shy of a century of top-flight goals and Potter admits his side will have to be at their best to stop him reaching that landmark.

“He is an absolutely top player and with top players, even when you have a plan, they can still produce something,” Potter said.

“He is a Premier League winner, he was incredible at the Amex earlier in the season so I have huge respect for him and what he can do. But they also have a lot of other players who can hurt you, so you have to defend well as a team.”

Potter also expressed his respect for his opposite number Brendan Rodgers, adding: “[They are] a very good team, very organised team, very powerful side with players that have won the Premier League.

“Great experience and a mixture of that experience plus some younger players with not just potential but they can affect the top end of the Premier League at the moment.

“They’re third and absolutely there on merit. They can attack you in lots of ways and defensively they are really strong as well. They’re a top team and Brendan has done a top job there.”