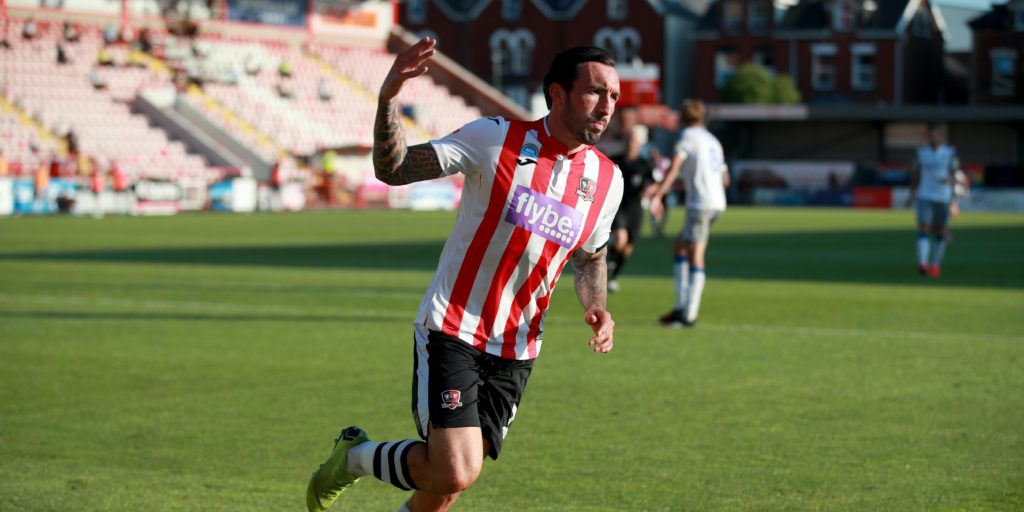 The Grecians overturned a first-leg deficit.

Exeter finally came out on top of their League Two play-off semi-final with Colchester as Ryan Bowman’s goal deep into extra-time sent the Grecians to Wembley with a 3-2 aggregate win.

After the hosts went 2-1 up in the tie, Colchester levelled things up in the 78th minute and as both teams looked dead on their feet, Archie Collins played a superb through ball to Bowman, who made no mistake with a clinical finish to secure a 3-1 victory on the night.

Exeter, trailing 1-0 from the first leg, made a promising start to the game and went in front after 10 minutes.

A Randell Williams cross found Alex Fisher, whose shot was well saved; Jake Taylor’s follow-up was blocked and as the ball fell to Aaron Martin, 15 yards out, he drilled a fine shot past Dean Gerken and a host of defenders and into the net.

Colchester’s Cohen Bramall was penalised for a handball, jumping for a high ball with Williams, giving Exeter a free-kick just outside the penalty box.

The Colchester man picked up a yellow card for his misdemeanour and Gerken had to be at his best to keep out Williams’ fine effort, that dipped over the wall and towards goal.

Colchester rarely threatened in the first half and the closest they came was when Luke Norris glanced a header goalwards, but recalled goalkeeper Jonny Maxted was equal to it.

The second half started in cagey fashion, but Exeter went 2-0 up on aggregate after 58 minutes. Bowman headed against the upright from a delightful Nicky Law cross, Fisher picked up the loose ball and teed up Jayden Richardson and his shot squeezed under Gerken and into the net.

Exeter were having opportunities to attack, but their poor final ball let them down and with 12 minutes remaining, Colchester levelled the tie.

Bramall’s cross was palmed away by Maxted and straight to Courtney Senior, who made no mistake with a simple tap-in.

Maxted made amends with a great save in the 90th minute as he denied Kwame Poku in a one-on-one and another counter ended with Theo Robinson seeing an effort deflect off Pierce Sweeney and go behind.

Both teams struggled at the start of extra-time as tiredness kicked in and chances were very much at a premium. Bowman did have an opportunity as Brennan Dickensen crossed from the left, but he could not adjust his body and get a shot away.

Nigel Atangana was off target from distance for Exeter as they began to get on top of a game that had ebbed and flowed from the first whistle. But the longer it wore on, the more tiredness became apparent for both teams.

Then, in the 112th minute, Bowman put Exeter in front after a superb driving run through midfield and pass by Collins to finally win the tie and send the Grecians to a third Wembley final in four years.