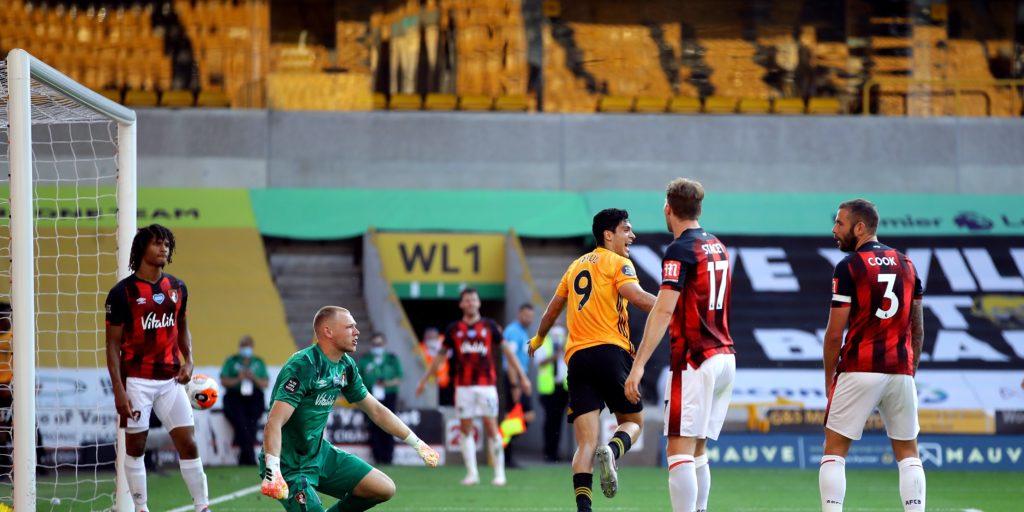 The Mexico international has scored 24 goals in all competitions for Wolves this season.

The Mexico international’s second-half header secured a 1-0 victory over Bournemouth at Molineux.

Wolves are sixth, just two points behind fourth-placed Chelsea who now have a game in hand, and they travel to Stamford Bridge on the final day of the season.

Jimenez’s 15 league goals is also the most by a Wolves player in the top flight since John Richards scored 17 in 1975-76, leaving Nuno impressed.

The Wolves boss said: “He has been working very hard and he is a special player. His motivation is to improve, he has broken the club record (most goals in a Premier League season) and he is challenging himself again and again every day.

“He has improved in a lot of things, I cannot be specific with one, but if you asked me the other way around there is also a lot of room to improve. He can be better.”

Nuno joked that he would talk to the striker after Jimenez said the club should dream big following two straight wins after the restart.

He added: “Our players think, they get excited after a game. I’ll put him in his place.”

Despite Wolves’ excellent form – they have lost just twice in the Premier League in 2020 – Nuno still refused to be drawn on their Champions League hopes.

“We have two days to prepare for Aston Villa, let’s rest well and prepare for the next game, that’s the only thing in our minds now,” he said.

“We are in the middle of a pandemic, we have been through three months, like everyone, with difficulties.”

In a game of few chances, Jimenez and Adama Traore combined for the 10th time this season to seal victory on the hour.

Traore swung in a cross from the right and Jimenez rose about Jack Stacey and Steve Cook to power in a header from six yards.

Pedro Neto should have made it 2-0 in stoppage time after an excellent run but fired wide.

Bournemouth never looked like recovering after going behind and are now without top scorer Callum Wilson for their next two games against Newcastle and Manchester United after he was booked for the 10th time this season.

They remain in the drop zone on goal difference.

Boss Eddie Howe said: “It’s very tight, it will go possibly down to the wire. We have to realise, although we are in a difficult moment, nothing is lost. We still have a chance to define our destiny.

“I’m frustrated because we gave everything to the game. We started well, the first half was pretty good. The second half they put us under more pressure and the goal is out of nothing.

“It was a carbon copy of their goal at West Ham, which is disappointing. You’re not going to stop every cross but we should have defended the cross better.

“We’re not creating enough, nowhere near enough. That’s the thing which will hurt us more. We have good technical players but it didn’t show. We were wasteful with the ball and ultimately I think that has cost us the game.”