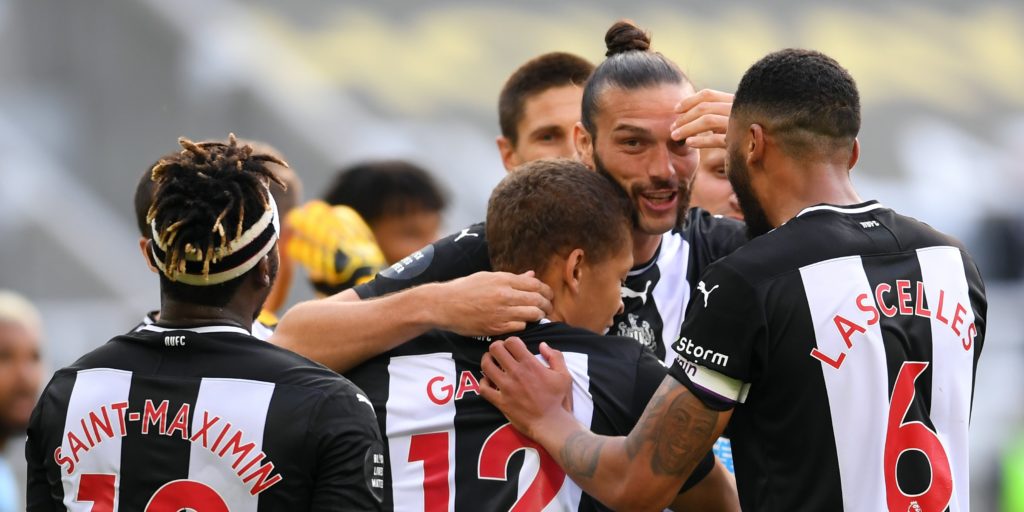 Dwight Gayle is hoping he has caught Steve Bruce’s eye as he attempts to end a difficult season in a positive way.

The 29-year-old striker fired Newcastle to within seven minutes of securing victory over Aston Villa on Wednesday evening with his first Premier League goal since May 2018, a season-long loan at West Brom and a succession of niggling injuries having prevented him from doing so sooner.

Magpies head coach Bruce is a big fan having tried to sign the frontman three times earlier in his managerial career, but with GBP 40million summer signing Joelinton, Allan Saint-Maximin and Miguel Almiron ahead of Gayle and Andy Carroll, with whom he combined for his goal, in the pecking order, the Londoner knows he has work to do.

He told nufc TV: “I need to do more and I need to get more minutes and help out the team a lot more, I know I need to do that.

“It’s been a frustrating season for me injury-wise and hopefully I can help out the team as much as I can over the next few weeks.

“The boys have been fantastic over the last few weeks, they’ve looked a real threat. We performed so well on Sunday (in a 3-0 win against Sheffield United) and hopefully we can keep banging on the door when we come off the bench to prove to the manager that we’re all there to help out.”

Gayle struck within a minute of his introduction against Villa, accepting Carroll’s pass and holding off defender Ezri Konsa before beating keeper Orjan Nyland.

However, the Magpies could not hold on to add another win to the one they secured against Sheffield United on Sunday as substitute Ahmed Elmohamady forced a 1-1 draw with an 83rd-minute equaliser.

Nevertheless, they will head into Sunday’s FA Cup quarter-final showdown with Manchester City knowing their top-flight status is all but mathematically assured having reached 39 points with seven games to play.

Gayle said: “We’ve taken a lot of pressure off ourselves in terms of looking behind us, so now we can go into Sunday’s performance, give it a good go and hopefully we can get the result.”

Villa, however, remain deep in trouble, sitting in 19th place in the table as one of three teams – Bournemouth and West Ham are the others – on 27 points and Wolves, champions-elect Liverpool and Manchester United their next three opponents.

Asked if his team are going to have to do it the hard way, head coach Dean Smith said: “Yes, it was never going to be easy. We’re in the Premier League for a reason and we are looking forward to all those games.

“We took a little bit of criticism for the Chelsea game, but sometimes you have to go and be pragmatic in these situations. We’ve conceded too many goals, too many chances throughout the season.

“I know its only a marker, but the first two games on expected goals, we deserved to win, and the fact that we are restricting good teams to so few chances at the moment can only be a positive for us stepping forward.”