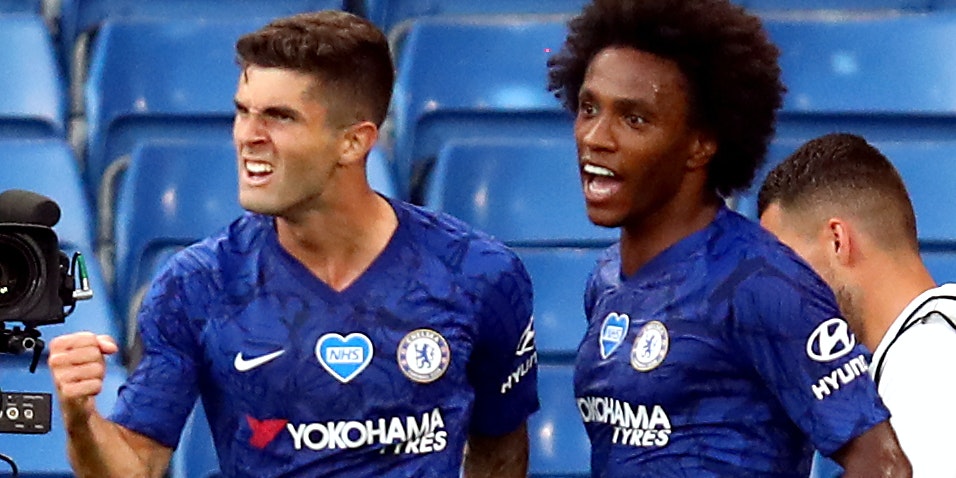 Goals from Christian Pulisic and Willian earned the victory.

Liverpool are top-flight champions for the first time since 1990 thanks to Chelsea’s 2-1 win over Manchester City at Stamford Bridge.

Kevin De Bruyne whipped in a wonderful, equalising free-kick for City, but Willian coolly converted a penalty once Fernandinho was sent off for handball on a Video Assistant Referee (VAR) check.

Liverpool’s coronation has been on the cards since Christmas but was delayed and even under threat due to the coronavirus shutdown.

Now, though, the Merseyside party can start in earnest, after Chelsea played Premier League kingmakers for the second time in four years.

This time around, Stamford Bridge was an eerie ghost ground, with the title-deciding clash held behind closed doors amid the continued pandemic fallout.

Chelsea’s victory might have rubber-stamped Liverpool’s title, but this battling Blues performance will also prove a huge boost in the race for Champions League qualification.

Two wins in two after the league’s resumption puts fourth-placed Chelsea five points clear of Manchester United in fifth, and just one behind Leicester in third.

Maybe now Liverpool fans will forgive Chelsea for scuppering their 2014 title bid, with that 2-0 win at Anfield that will be forever remembered for Steven Gerrard’s slip.

Chelsea certainly had to sweat for this result at a boiling Stamford Bridge, with City dominating possession and territory from the off.

Kepa escaped unscathed from a poor clearance then conjured a fine save from Fernandinho’s snap header.

Chelsea grew into the encounter, however, with Ross Barkley, Olivier Giroud and Pulisic all influential.

Barkley saw his low drive cleared off the line from Fernandinho, and that after Ederson palmed away an effort from Mason Mount.

Andreas Christensen’s powerful header was well saved at point-blank range by Ederson, and Cesar Azpilicueta blazed the loose ball high over the bar.

Just when Chelsea would have started to fret about turning around without any reward, Mendy lingered too long and Pulisic seized full advantage.

The fit-again USA forward gleefully zipped onto the ball and away from City’s defence, before steadying himself and slotting a fine finish past the helpless Ederson.

Mendy opened the second half so desperate for atonement that one piledriver poleaxed Christensen, while another soared high into the stands.

In a flash City were level though, with the previously subdued De Bruyne unleashing a sumptuous free-kick.

As the momentum continued to swing City’s way, Raheem Sterling raced through and lifted the ball over the onrushing Kepa – but onto the post.

Pulisic so nearly doubled his and Chelsea’s tally, rounding Ederson and rolling the ball goalwards. But Kyle Walker produced a fine sliding challenge to clear off the line.

Chelsea pressed again, with Abraham and Pulisic both denied in a lengthy goalmouth scramble.

Fernandinho was called up for handball after a VAR check though, the City captain conceding a penalty and receiving a red card.

Willian stepped up, checked his run and buried the spot-kick.

City pressed to the last but Chelsea held out – sealing a big win in the Champions League race, but also that elusive league crown for Liverpool.