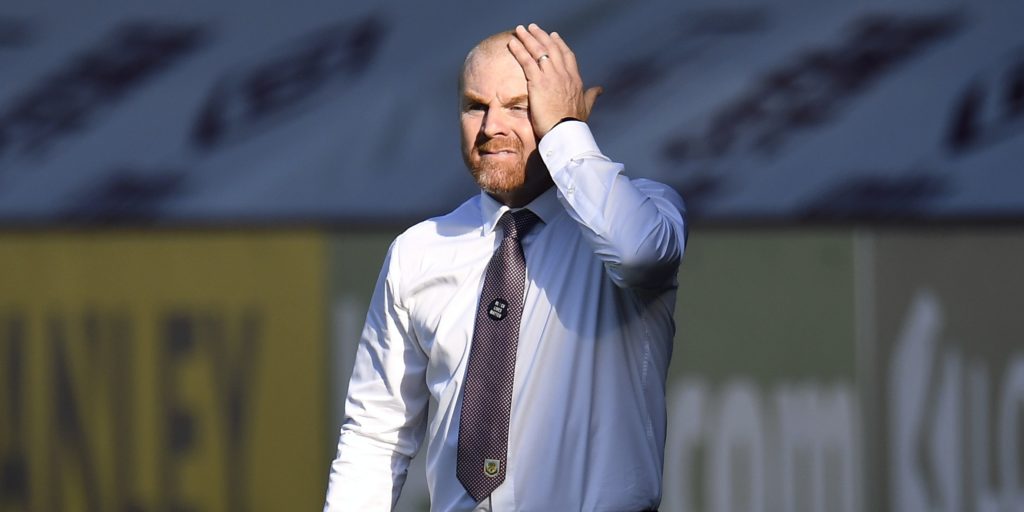 The Clarets boss has two years left on his contract but noticeably said nothing about his long-term plans at Friday’s press conference.

Sean Dyche denied that questions over his future will be a distraction as Burnley look to finish the season strongly.

Thursday’s 1-0 win over Watford was a positive response to a difficult week on and off the pitch for the Clarets.

A ‘White Lives Matter Burnley’ banner was flown over their game against Manchester City on Monday, while Dyche made clear his frustrations with the board about player contracts before the defeat at the Etihad Stadium.

The 48-year-old’s comments led to speculation he could look to leave Turf Moor after seven and a half years, and gave his players another thing to think about as they eye up a European place with seven games remaining.

Asked if he needed to draw a line under the questions, the Burnley boss said: “It’s not a distraction to me.

“I don’t know if you noticed, but I was at it last night, I had to apologise last night for some of the loose language because the microphones picked it up.

Faced with questions over his position after the match, Dyche had pointed to that commitment on the touchline and at the training ground, but noticeably said nothing about the long term.

Asked if anything should be read into those comments, Dyche on Friday said: “I’ve got two years left on my contract, that’s the obvious thing you can read into it. I’m still here.

“I’ve been linked many times with other situations and I’m still here. I’m working hard with the team, I want the team to be successful this year and so far relatively we have been.

“Can we take it further? Can we finish further up the table? It’s difficult to beat the season where we finished seventh but it doesn’t mean it can’t be done.

“We keep building and see where it takes us. That’s my outlook. If that changes, that’s the way it goes. I’ve said it for seven and a half years, there comes a time where one way or another things change. But I’m still here.”

Dyche is no stranger to speculation linking him with other jobs, but the difference this time is an apparent rift with the Burnley board rather than the admiring glances of a rival club.

“People got bored with linking me with other clubs, so this time they link me with no clubs and say he’s had enough,” Dyche said.

“There’s always got to be a story. If people want to talk about it, that’s up to them. I’m the only one that knows what’s going on.”

Monday’s win moved Burnley up to 11th, three points behind Tottenham in seventh in what could be a congested battle for Europe.

It would need to come against the odds, though, after injuries and the exits of Jeff Hendrick, Joe Hart and Aaron Lennon – all out of contract – left Dyche short of numbers.

“We are looking up, but obviously it’s a bigger challenge when you’ve only got 14 fit first-team players and three are defenders on the bench,” he said ahead of Monday’s trip to face Crystal Palace.

“It makes the challenge more difficult, but we’ve got a very competitive group, and an energy and a belief in how we work so we’ll see where we can take it from here.”