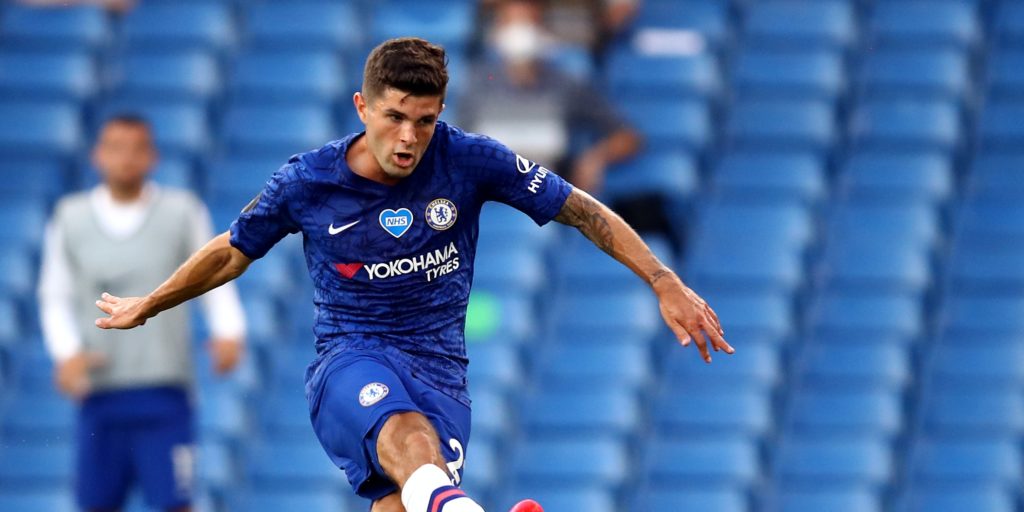 The USA forward has struck twice in as many games on the Premier League’s restart.

Christian Pulisic is ready to answer Frank Lampard’s call for a boost in his Chelsea goal return.

The USA forward has struck twice in as many games on the Premier League’s restart, helping the Blues seal crucial wins over Aston Villa and Manchester City.

Blues boss Lampard has challenged his wingers and midfielders for more goals throughout his first term at the Stamford Bridge helm, with Pulisic proving no exception.

The 21-year-old now boasts seven league goals this term however, and is determined to keep glossing those stats as Chelsea chase Champions League qualification.

Pulisic was unlucky not to double his tally in Thursday’s Stamford Bridge win over City when Kyle Walker cleared his effort off the line.

Asked if he is eyeing yet more goals, Pulisic said: “Yeah, we have to capitalise on opportunities.

“I had one in the second half as well, but I’m just happy to help the team out by scoring.

“We went into the City game with a really confident mindset to go out and win.

“Obviously we want to finish the season strongly, but we feel we’re capable of a lot more as well.”

Pulisic joined Chelsea last summer after three years with Borussia Dortmund and was settling in nicely when injury struck in January.

A troublesome hip complaint kept the pacy forward out of action longer than expected, but now the 34-cap USA star looks ready to hit top form.

Chelsea’s hard-fought win over City on Thursday could prove a significant step forward in the Blues’ battle for a top-four finish.

Lampard’s men will take a break from league concerns to face Leicester in Sunday’s FA Cup quarter-final, before making the trip to West Ham on Wednesday night.

Asked if he can now make up for the time lost to his niggling adductor problem, Pulisic told Chelsea’s official club website: “Yeah definitely, it’s been a while for me, especially because of the injury.

“And I’m just happy I can be back out on the field, just doing what I can to help the team.

“The three points (against City), that’s massive for us.

“But now it’s about sustaining and continuing these kinds of performances and getting as many points as we can, because we really want to secure that top four.”