Home News No chance Villa will give up hope in relegation fight, says Tyrone Mings

No chance Villa will give up hope in relegation fight, says Tyrone Mings 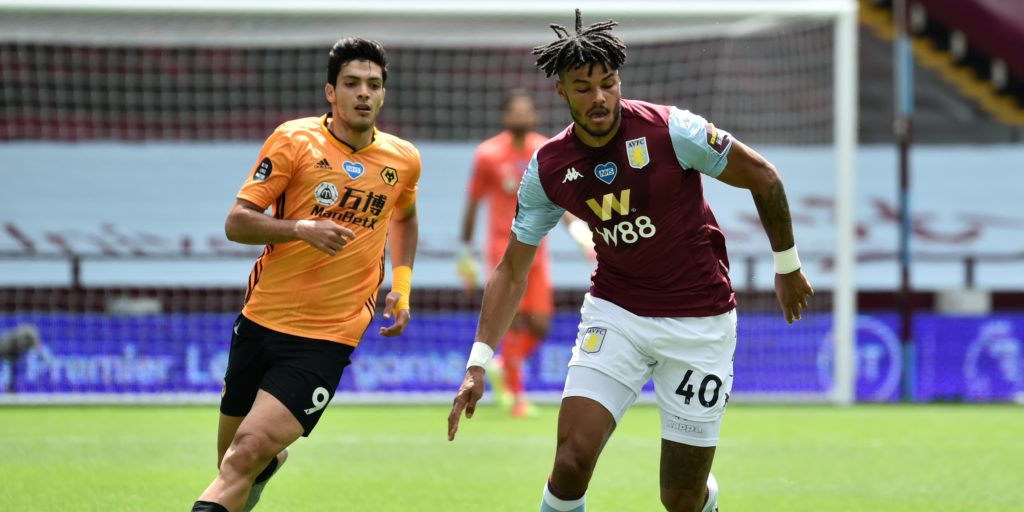 Villa remain in the bottom three with six games remaining.

Leander Dendoncker’s strike sunk them on Saturday as Wolves grabbed a 1-0 win at Villa Park.

It kept Dean Smith’s side in the Premier League drop zone on goal difference, having played a game more than their relegation rivals.

Villa go to new champions Liverpool on Sunday having failed to win in their four games since the top flight returned.

But, despite a daunting run-in, which includes games against Manchester United, Arsenal and Everton, Mings remains positive.

“We have to believe now and we have to get through this period, continue what we’ve been showing so far and give more. We have a great belief in the dressing room, I don’t believe for any moment we’ll throw the towel in,” the England defender told Villa TV.

“The games are so tight, unfortunately we have come out the wrong side of it. We are working tirelessly to try to pick up the points we need. It’s a very tough division, but it’ll come if we stick together.

“We’re at the stage of the season where we need points and there wasn’t much between the teams on Saturday.

“To walk away with no points is hugely frustrating. We’re fully aware we need points. There’s still a huge amount of belief in the team.

“We don’t want to make any excuses about not having the fans as to why we’re not picking up points. Saturday was a very close game, we’ve adapted well.”

Villa managed just one shot on target and midfielder Dendoncker won it when he swept the ball into the bottom corner from 18 yards just after the hour.

It was Wolves’ seventh clean sheet in their last eight league games and moved them up to fifth – just three points behind third placed Leicester in the race for the Champions League.

“I thought the lads were brilliant, it’s always tough coming here with or without fans. We made sure we managed the game properly so it was a good day’s work,” skipper Conor Coady told the club’s website.

“It’s massive (the clean sheet), that’s what we want to do as a team. It’s something we work on week-on-week. It’s a team effort and something we pride ourselves on.

“We said when we first came back we wanted to improve on pre-lockdown. We’re not looking too far ahead, the next one is against Arsenal. It’s something we’re look forward to, we’d like a game mid-week to tell you the truth.