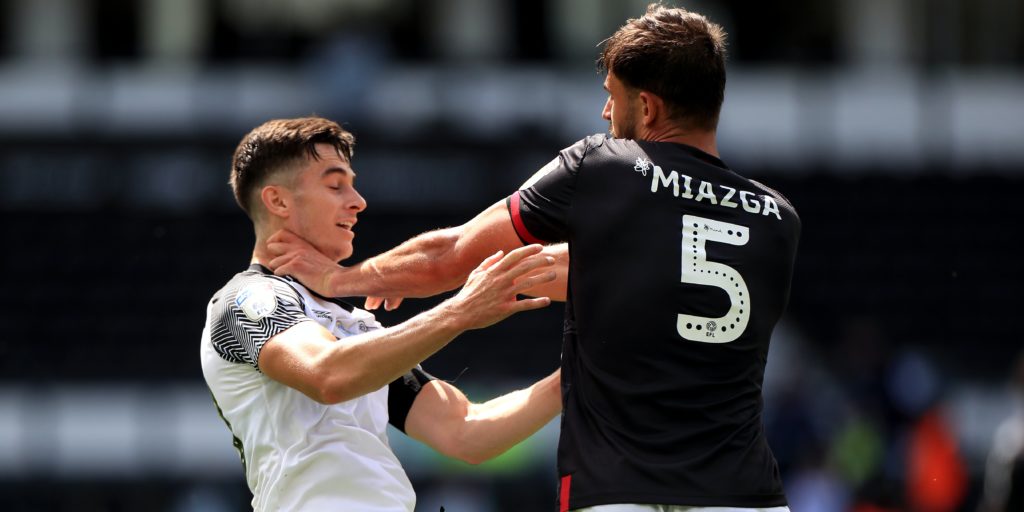 The pair were dismissed after the final whistle at Pride Park.

Derby’s Tom Lawrence and Reading’s Matt Miazga were criticised by their respective managers for letting the rest of their team down after both were shown red cards after the final whistle in the Rams’ 2-1 win over Reading at Pride Park.

Something had been bubbling under the surface between the two players during the match and at the end it exploded as they squared up to each other.

Miazga swung a punch at Lawrence, who then head-butted the Reading defender. Miazga then slapped Lawrence across the face before other players arrived on the scene to separate the pair.

Both players will now have to serve three-match suspensions for violent conduct.

“I’ve not had chance to talk to him yet, but it sounds like he’s reacted,” said Reading manager Mark Bowen. “I’ve been told he’s been head-butted and he’s swung a punch reacting. It’s two red cards, there’s no complaints.

“He’s let himself down and his team-mates as he will miss games. Whether I will take action, I don’t know until I see it properly. It’s a disappointing end to a frustrating afternoon.”

Lawrence had earlier given Derby the lead with a lovely curling shot and Rams boss Phillip Cocu said: “It’s something I’m really disappointed about and upset about because after the win and the great goal he scored he has let the team down and it’s a pity.

“He’s an important player for us and he needed to control his emotions and now he will miss games for us.”

Wayne Rooney scored Derby’s second goal from the penalty spot to give his side a 2-0 half-time lead which in truth flattered the Rams.

Andy Rinomhota’s header after 62 minutes saw Reading pull a goal back but Derby held on to record a fourth straight Championship victory which keeps them three points outside the play-off places.

Asked about his side’s top-six aspirations, Cocu said: “We just focus on one game at a time and on our football. We were playing much better before the break happened and we have carried that on after the restart.

“It is not the same without the fans but we have been very good at home and it is pleasing to get another win. We are in a position to fight for a play-off spot with all the other teams.”

Bowen felt his team were unfortunate to be returning home with nothing to show for their efforts.

He said: “I thought we conceded too much space in the first half but I’ve looked at the stats and we had three or four good chances to score and I feel we totally dominated the second half.

“Phillip Cocu and his staff must have been looking at each other at half-time and wondering how they were ahead in the game. I thought we were the best team but I am not going to beat up my players.”