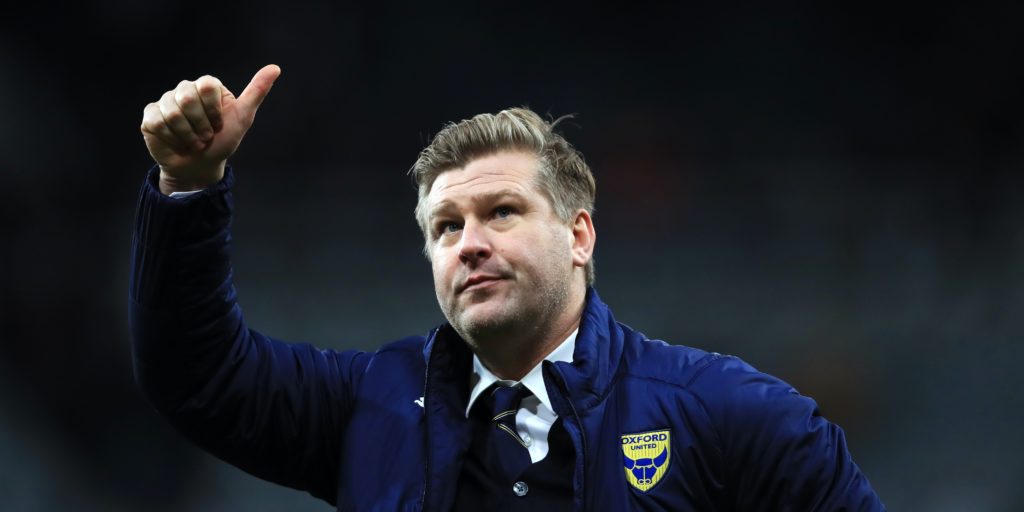 Oxford boss Karl Robinson has vowed to draw on the club’s cup tradition as he prepares his side for Friday’s League One play-off semi-final first leg against Portsmouth.

Robinson has already forged something of a reputation as a knockout specialist having masterminded MK Dons’ crushing 4-0 win over Manchester United in the 2014 League Cup.

And in addition to battles with Newcastle and Manchester City earlier this season, Robinson has been harking back to one of the U’s greatest moments when they clinched the League Cup at Wembley in 1986.

Robinson said: “I spoke to John Aldridge on what it means for the people of Oxford. He’s been there and he’s won the cup with them, and we go back a long way.

“I’ve also been speaking to Ray Houghton this week. Our generation was brought up on the FA Cup and one-off game scenarios. It makes this game so special to so many people.”

Oxford slipped from third to fourth in the revised, points-per-game final table and are looking to seize their chance to return to English football’s second tier for the first time since 1999.

And Robinson believes his side’s front-foot style – not to mention their recent experiences against top-flight opposition – will boost their chances of success in a knockout environment.

“We’ve been given a two-game shoot-out and a one-off final. We can use the experience of the Newcastle and Man City games – we will be using that Cup mentality,” added Robinson.

“These games are massive but they won’t define my players. They have already overachieved. I love them, I love working with them, they’re great people and really care.

“It won’t be lack of desire why we won’t go up. I promise you my players will not let me down. I can’t promise we will win, but I promise they will give everything.

“People have missed it and are now getting connected and excited again. We’re seeing moods improve and we’re no different, and we hope we can put a smile on Oxford United fans’ faces on Monday.”