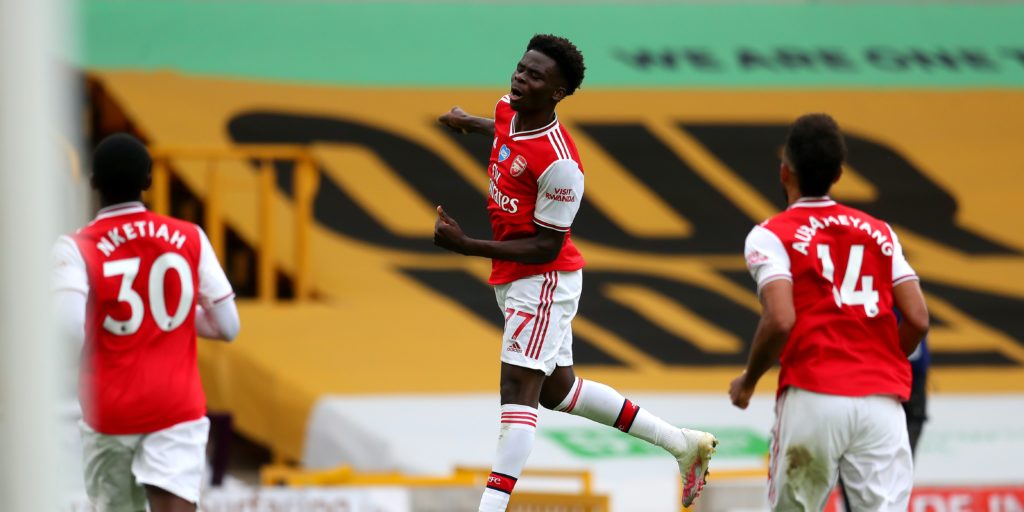 Arsenal closed the gap to Wolves to three points in the fight for a European spot.

The 18-year-old, who penned a new long-term contract at the Emirates this week, struck his first Premier League goal to give the Gunners’ European hopes a huge boost.

Boss Mikel Arteta continued to justify his hard-line stance on any player yet to buy into his beliefs, with Mesut Ozil and Matteo Guendouzi again missing.

They are three points behind Manchester United after losing their 100 per cent record since returning from lockdown.

They remain in the hunt for a shock top four spot and, while a return to Europe’s top table remains fanciful for Arsenal, they bagged a deserved fourth straight win in all competitions despite a slow start.

Emiliano Martinez, who had a 15-game loan spell at Molineux five years ago, was immediately called into action to block Traore’s poked effort in the first few seconds.

The forward, partnering Raul Jimenez instead of Diogo Jota, also fired wildly over but there was no real sign of an early breakthrough.

Saka initially struggled on the right as the Gunners took time to find a rhythm but Rui Patricio grabbed Pierre-Emerick Aubameyang’s prodded half-volley in the 26th minute as they flickered into life.

Wolves lacked the tempo needed to stretch the visitors, with Leander Dendoncker glancing well wide and Jonny dragging across goal.

Arsenal, without Nicolas Pepe after his wife went into labour, grew in confidence and Eddie Nketiah went close when he pounced on a kind ricochet and Patricio turned his low drive onto the base of the post.

It was a warning Wolves failed to heed and the Gunners struck the opener two minutes before the break.

A sweeping move saw Aubameyang find Kieran Tierney on the left and his cross deflected off Matt Doherty for Saka to swivel and beat Patricio from 12 yards.

It was the first goal Wolves had conceded in 448 minutes and they started the second half with added urgency, Nuno introducing Jota 10 minutes in.

Jota had a shot blocked and Raul Jimenez saw a dubious penalty claim rejected before the pair combined for Traore to waste a glorious chance.

The forward’s end product had drastically improved this season but in the 64th minute he fluffed his lines when, having been put clear by Jota, he chipped over with just Martinez to beat.

Arsenal maintained their concentration, although posed a limited threat for much of the second half and Nketiah headed a rare chance over with 13 minutes left.

But, as Wolves began to chase the game, space opened up and Lacazette pounced with five minutes left, collecting Joe Willock’s cross to ghost past Conor Coady and find the corner.

Willock almost added a third a minute later but Ruben Neves hacked his scuffed effort off the line.