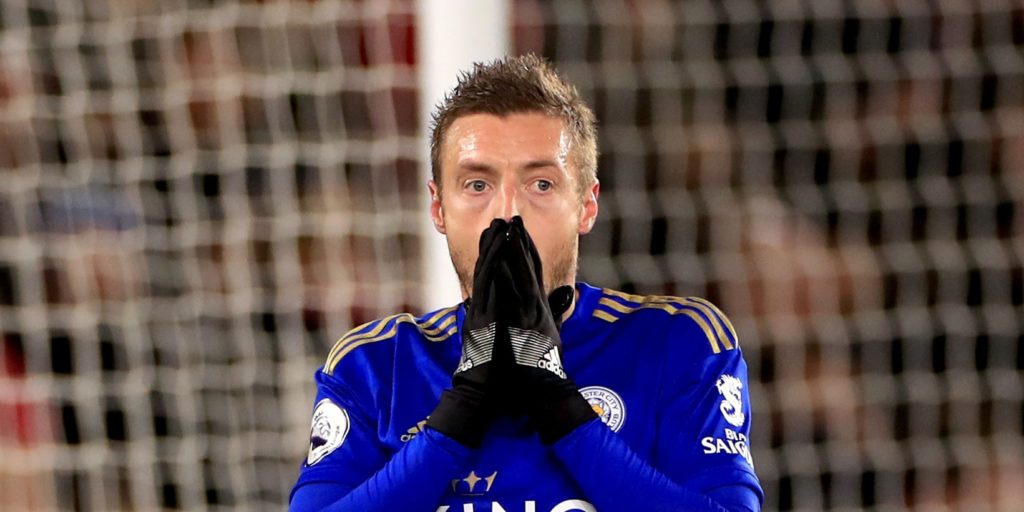 The striker is just one goal away from the milestone of 100 Premier League goals.

Jamie Vardy’s goal drought is not a cause of concern for Leicester boss Brendan Rodgers.

The 33-year-old has not scored since the restart and his only goals of 2020 came in the final match before the lockdown in the Foxes’ 4-0 home win against Aston Villa.

That double took Vardy to 99 Premier League goals and, despite the barren run, he remains the division’s joint-top scorer on 19 goals alongside Arsenal’s Pierre-Emerick Aubameyang.

Vardy’s uncharacteristic spell appears to be mirroring Leicester’s recent form, with the Foxes yet to win since football resumed.

Asked if he was worried, Rodgers replied: “No, I think Jamie is proven and since I came into here he has been a breathe of fresh air.

“His talent and his goal scoring ability has been right up there for the whole period I have been here. I think when he gets the opportunities he will take them and I think over the course of these games he hasn’t had many.

“I have spoken about ways that we can create him more chances because it’s about the team so we have to look to attack the games. I was encouraged buy the second half at Everton as we had more numbers up there to score and when we have that it obviously helps him as well.

“I have no worries about Jamie. He is a top level striker and sometimes these milestones when they are so close can take that bit longer to achieve, but he is still such a real catalyst for us and a very important player for us.”

Rodgers insists he never had any reservations about Leicester’s game against Crystal Palace going ahead on Saturday despite the Midlands city having lockdown measures re-imposed.

Leicester became the subject of the first local lockdown in the UK on Monday after a spike in Covid-19 cases. Non-essential shops were closed from Tuesday after cases in the city accounted for 10 per cent of all nationwide positive tests over the past week.

The club spoke with local authorities, its Safety Advisory Group and the Premier League following the government’s announcement and all parties were satisfied that the protocols in place would not pose a greater risk to club personnel, visiting teams or the surrounding communities.

Asked if he ever had any reservations, Rodgers said: “None at all. We are in a bubble here in terms of our training facility, and obviously the games, and we get regularly tested so nothing really has changed on that front.

“It’s worth pointing out that there’s been a huge noticeable difference here in Leicester since the lockdown was extended and that’s credit to the people of Leicester and the city, they are doing everything they possibly can to adhere to what the government has asked.

“But within our football we are in a bubble as I say and there are no worries.”

James Maddison is a doubt for the Palace game after the midfielder aggravated a hip problem on his return from the injury at Everton on Wednesday night.