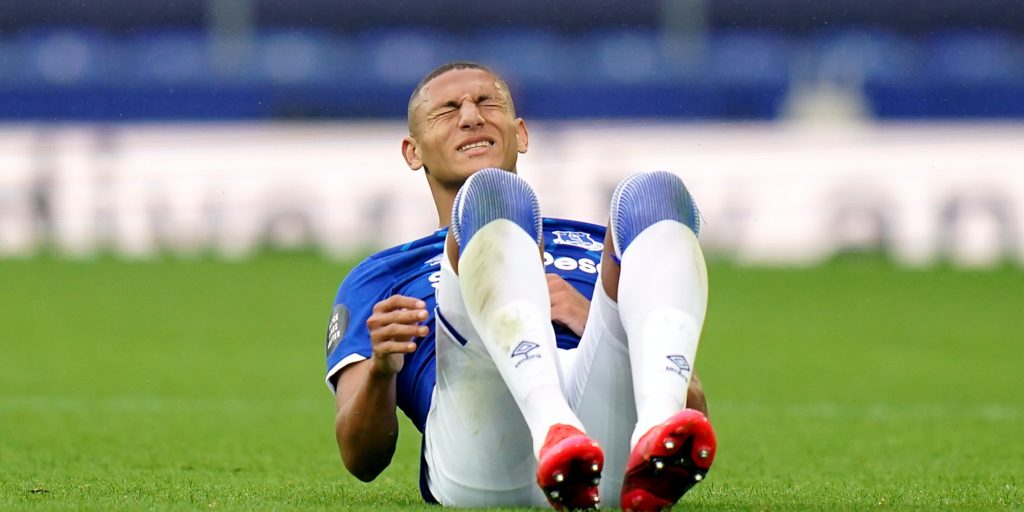 The Toffees take on Spurs on Monday and the Brazil forward is likely to have shaken off an ankle problem.

Everton boss Carlo Ancelotti is confident Richarlison will be fit for Monday’s away match against Tottenham.

The Brazil forward, having scored the opener, hobbled off in the second half of Wednesday’s 2-1 win over Leicester with an ankle problem.

Ancelotti told a press conference on Friday: “Richarlison didn’t train today, but I think he will be able to train tomorrow and is not going to have any problem to play on Monday.

“I think he will be fine. He has to train tomorrow and Sunday but I think he is recovering well from the knock.”

While Richarlison has netted 13 goals for the Toffees this term, their top scorer is Dominic Calvert-Lewin with 15.

Calvert-Lewin scored eight times in 11 league games before the season was halted due to the coronavirus pandemic but since the restart is yet to find the net after three matches.

When asked about him on Friday, Ancelotti was keen to praise the 23-year-old.

“Its true he didn’t score but I think the most important part is the work he is doing, also defensively,” Ancelotti said.

“I think the fact we did well defensively counts to the work that all the players were able to do – the striker first, and Richarlison and Calvert-Lewin did a fantastic job.

“I never had strikers honestly with this kind of energy defensively. I appreciate this a lot. It doesn’t matter if he didn’t score because he will score again without a problem.

“I never asked to my strikers in the past to score goals. Work well, work for the team, be humble – Dominic is doing all these kind of things and I am really happy with this.”

Everton face a Tottenham side who were left feeling aggrieved by a video assistant referee decision on Thursday as they were beaten 3-1 at Sheffield United.

Harry Kane appeared to have equalised but the effort was disallowed, with it being deemed via VAR that Lucas Moura had handballed in the build-up.

Asked for his thoughts on the much-discussed incident, Ancelotti said: “First of all it was a really, really complicated and difficult decision.

“I think the decision they have made comes from the rules that are in place at the moment.

“So maybe at the end of the season we can think if it is possible to change this kind of rule. But in this moment we have to respect the rules.”