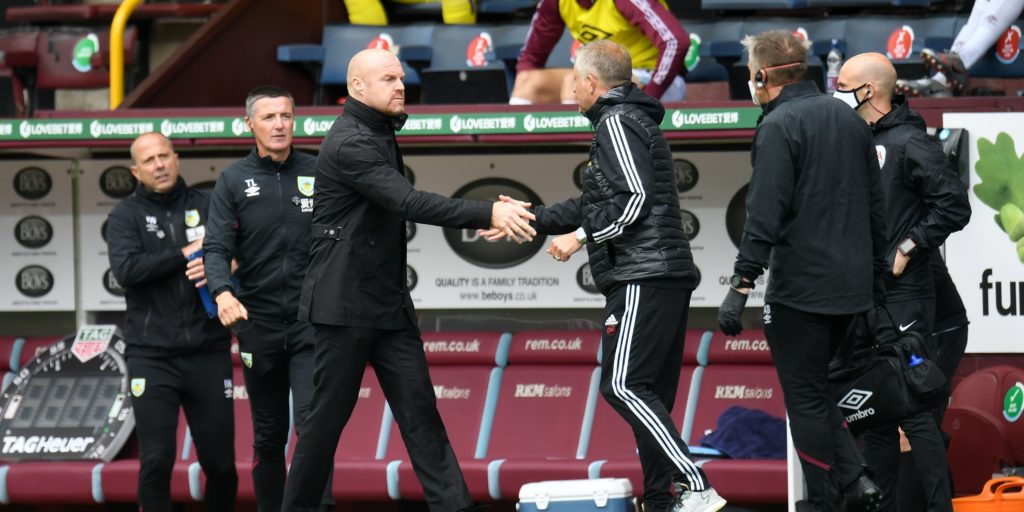 A top-seven finish is still possible after 1-1 stalemate with Sheffield United.

Burnley manager Sean Dyche insisted he is still not thinking about Europe after a draw with Sheffield United kept his threadbare side in with a chance of a top-seven finish.

John Egan’s first Premier League goal came with 10 minutes left to deny Burnley victory after stand-in skipper James Tarkowski put the Clarets in front before half-time, with both managers agreeing a 1-1 draw was a fair result.

The result moves Burnley to 46 points, two points behind United in eighth place, with both sides still in the hunt for Europe amid the uncertainty brought by Manchester City’s appeal against their two-year ban.

But Dyche said a second European qualification in three years was not his concern at this point.

“We’re on our second highest ever points total at this stage so I’m not going to be overly critical of the players, they’re working to their maximum and we’ve got very few bodies.

“The real message from me was to be competitive in the remaining games and see where it takes us.”

Tarkowski took over the captain’s armband as a thigh injury brought to an end Ben Mee’s run of 70 straight Premier Legaue games.

And Tarkowski would take over goalscoring duties too, poking home only his second of the season just before half-time when Jay Rodriguez, back from injury, flicked on Dwight McNeil’s free-kick.

It came at the end of a first-half Sheffield United had dominated, with Oli McBurnie and Sander Berge going close and the action largely confined to Burnley’s half.

Chris Wilder’s side, sluggish since the season restarted before Thursday’s 3-1 win over Tottenham, could not replicate that dominance after the break but were worthy of the point.

“I’m delighted we got something out of it,” Wilder said. “It’s been a tough week. We put a lot of effort into the game with Tottenham and looked a big leggy. The quality wasn’t as good as in midweek but the spirit was there.

If either of these teams is to play in the Europa League next season there is still much work to be done, with United one point behind Arsenal but four adrift of Wolves in sixth.

Burnley have been hit with a series of injuries and other issues – including speculation about Dyche’s future – since their return.

Though Rodriguez was fit to start and Chris Wood, Johann Berg Gudmundsson and Robbie Brady were all on the bench after injuries, Dyche admitted Mee and Jack Cork could now miss the rest of the season.

“Ben’s got a thigh strain and I don’t think it’s going to be an easy turnaround or a quick turnaround,” he said.

“Corky, it’s a reasonably serious ankle injury which is unfortuate and he might need something doing so he’s certainly out of these next games and possibly the remaining games, for both of them, we’ve got to wait and see.”