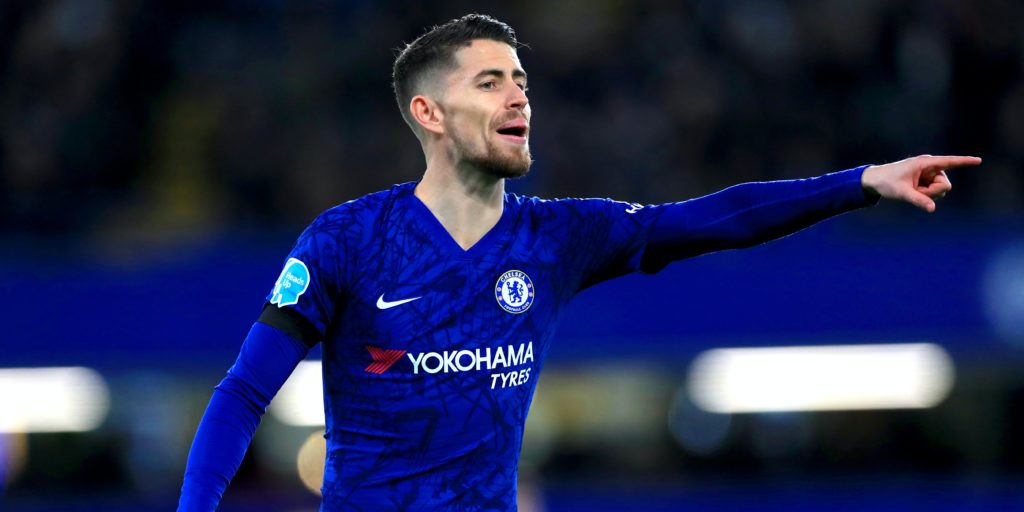 The Italian had fallen out of favour.

Chelsea manager Frank Lampard has praised the professionalism of Jorginho as he looks set to recall the midfielder in place of the injured N’Golo Kante.

Kante suffered a hamstring problem in Saturday’s Premier League win over Watford and, while Lampard revealed it is only a “low-level” issue, he is expected to miss the next two games.

The Blues face Crystal Palace on Tuesday night and Sheffield United on Saturday, with Kante likely to be absent for both.

“Kante won’t be in the squad,” Lampard said ahead of Tuesday’s London derby at Palace.

“It is a low-level hamstring injury. We are hoping it will be a week or so.

“We will see how it goes but I would expect we would be very lucky to have him for Sheffield United.”

With Kante sidelined, it is expected that Italy international Jorginho will replace him in the heart of the Chelsea midfield.

The 28-year-old was a regular in Lampard’s side ahead of lockdown but has yet to play a single minute since the season resumed.

Lampard would not be drawn on why the former Napoli player has seemingly fallen out of favour but has been pleased with Jorginho’s reaction.

“I don’t want to go into personal details of positional and tactical reasons why I pick a team, I just pick a team how I see best and they are my choices,” he said.

“He (Jorginho) has been very professional about it, he wants to play as every player does.

“It is one of the hardest parts of the job – telling a player they are not playing, particularly when they train well.

“Jorginho always trains well but he has handled it professionally and that is what I would expect.

“It is important that players, over the course of a season, in a competitive squad like we have are there to support players when they are out – and he has done that, to be fair.”

If they can win at Selhurst Park, Chelsea will move ahead of Leicester into third place – with the Foxes playing later in the evening away at Arsenal.

Three wins from four since the restart have seen Chelsea close the gap, while Manchester United have also kicked on.

Lampard conceded United’s form means they are the main threat from the chasing pack to Chelsea’s top-four ambitions.

“They are a very strong team and have been in great form for a very long period of time,” he said of Ole Gunnar Solskjaer’s side – who sit two points adrift of Chelsea and will face the Blues in an FA Cup semi-final later in the month.

“They’ve got really good individual players and you have seen the momentum they have gained at this part of the season, their front three are all scoring lots of goals.

“They are the biggest threat from behind but this is the Premier League, it looks like that today but it is how the teams now finish the season, going game by game.”