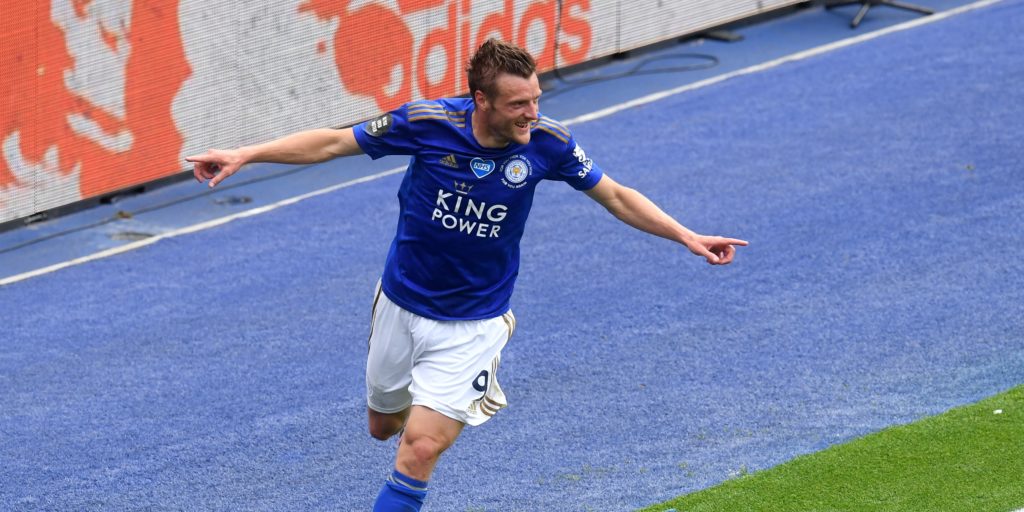 The 33-year-old won the Premier League with the Foxes in 2016 and scored his 100th goal in the competition on Saturday.

Jamie Vardy’s decision to remain at Leicester has cemented his legacy at the club, according to manager Brendan Rodgers.

The striker turned down the chance to join Arsenal in the summer of 2016 just weeks after spearheading the Foxes Premier League title success.

On Saturday he scored his 100th Premier League goal, 206 games after becoming the first GBP 1million signing from a non-league club when he joined Leicester in 2012.

Of the 29 players to become Premier League centurions, only Ian Wright (28 years 286 days) made his debut in the competition at an older age than Vardy (27 years 232 days).

Vardy staying at the King Power Stadium illustrates that the grass is not always greener and the so-called big move is not always the necessary route to success.

“It’s hard to knock players if they do want to move on because their careers are so short but he’s obviously felt really comfortable.

“He’s found a real home here, he is adored by the supporters and they absolutely love him and he has gone on and hit this milestone and I’m sure he’ll continue to create an incredible legacy here. I’m lucky to have him.

“It’s all individual choice, players will move on and clubs will lose players but his is an example that if you decide to stay you can continue to develop.”

Vardy scored twice in the Foxes’ 3-0 win against Crystal Palace on Saturday, reaching the 100 milestone with the first of those goals.

Palace boss Roy Hodgson, who managed Vardy during his time in charge of England, believes the Leicester striker’s name is firmly embedded within the fabric of the club.

“I always found him to be a very good trainer and a very good professional. He was someone who knew where he was going. He knew what he needed to do to succeed,” said Hodgson.

“Leicester must be unbelievably happy that they found him and gave him his chance. Leicester City’s success has had Jamie Vardy’s name pretty strongly imprinted on it.

“He came into league football from non-league and took to it like a duck to water. He knows his qualities and that’s the main thing. He knows what’s required. He doesn’t miss games. That’s another great quality.”