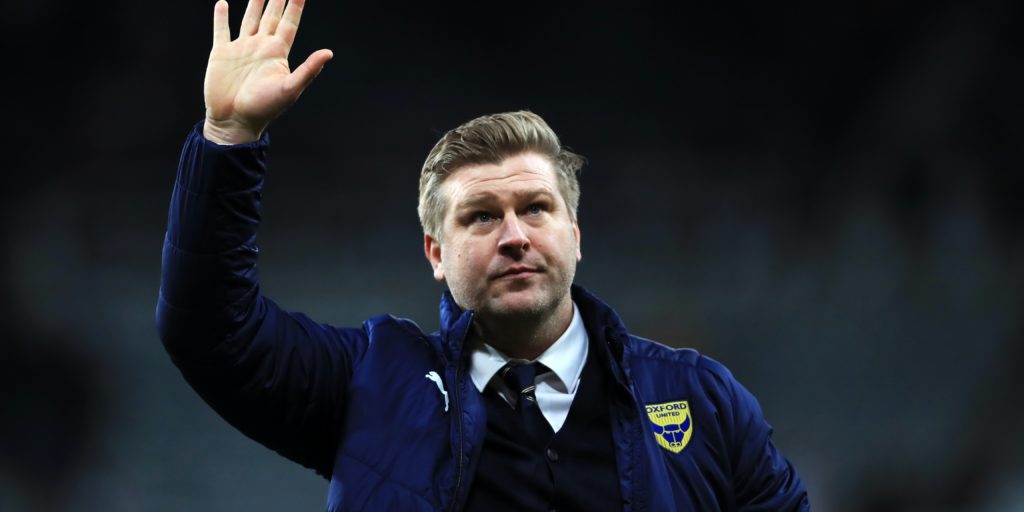 The U’s beat Portsmouth on penalties at the Kassam Stadium.

Oxford United boss Karl Robinson saluted his battling side as they beat Portsmouth on penalties to book their place in the Sky Bet League One play-off final.

Keeper Simon Eastwood’s superb save denied Cameron McGeehan in the shootout as the triumphant U’s scored all of their five spot-kicks.

Marcus Harness fired Pompey ahead in the 38th minute but Ellis Harrison scored an unfortunate own-goal in the third minute of first-half added time as Oxford drew level.

After both sides failed to finish the job in extra-time, Eastwood palmed away McGeehan’s penalty and Cameron Brannagan bagged the winning penalty to snatch a breathtaking 5-4 shootout win at the Kassam Stadium.

“I’m just full of admiration for the players,” said Robinson. “We’re in the final, what more can you say?

“When you think that I’ve had to sell my two best players in January and we came into this game with three or four struggling with injuries, it’s incredible.

“I had asked a few people in the game who have been in big penalty shootouts for their advice, and they passed that on, and through our sports psychologist too who was telling the players to be composed and just believe in themselves.

“I’m just gutted for our fans who couldn’t be here to celebrate it, and I’m gutted there wasn’t a full house in here to see this.

“But for Oxford United to be in the final is unbelievable. Jamie Mackie’s in tears in the dressing room, and he got me going too!

“I’m immediately proud of the appetite and desire of my players.

“As far as us and Pompey are concerned, we both finished on 60 points, and we’ve played out three 1-1 draws in our meetings this season, that shows how evenly-matched we are.

“I have to say we’re a little bit off it without our fans, they make a big difference to us here.

“I found it surreal to see Cameron Brannagan walking up to take that crucial last penalty because I had signed him for Liverpool Academy when he was six years old!

“We’re like one big family here at Oxford United. We’ll enjoy today and then start preparing for the final at Wembley.

“But in the past I have possibly over-prepared for the final beforehand, so I was keen not to do that this time.”

Jubilant Oxford shot-stopper Eastwood revealed: “I was feeling good with penalties. I only had to save one and the lads were great with theirs.

“We’re delighted we’ve got there [to the play-off final]. It’s a strange situation because you want to celebrate, but the job’s only half done.”

Portsmouth manager Kenny Jackett admitted: “I’m obviously very disappointed. We got our noses in front twice in the two matches and we’ve given away two sloppy goals.

“We’ve been able to take control by scoring the vital first goal but we’ve not been able to capitalise on it.

“With their goal, though I haven’t seen replays of it yet, apparently it’s just gone over (the line) – those are the small margins you are talking about.

“But I’ve got no qualms about goalline technology unusually being used in these semi-finals. We both knew these were the rules.

“We’ve been in the play-offs two years in a row now. We need to dust ourselves down, raise our standards and try to go one better next season and go up.

“And when training starts again we’ve got to make sure there is no hangover from this.

“We’ve got a good squad, we have shown good consistency over the last two years and now we’ve got to make sure we hit the ground running whenever it is we do start next season.

“Yes, I’m a bit disappointed that we didn’t produce more chances later in the game, but Oxford’s back four is very good.

“A lot of people go on about their attacking threat, but their back four is very stable.

“There weren’t many chances over the whole game and extra time, but my players have given all they’ve got.

“So congratulations to Oxford and we wish them all the best for Wembley.”