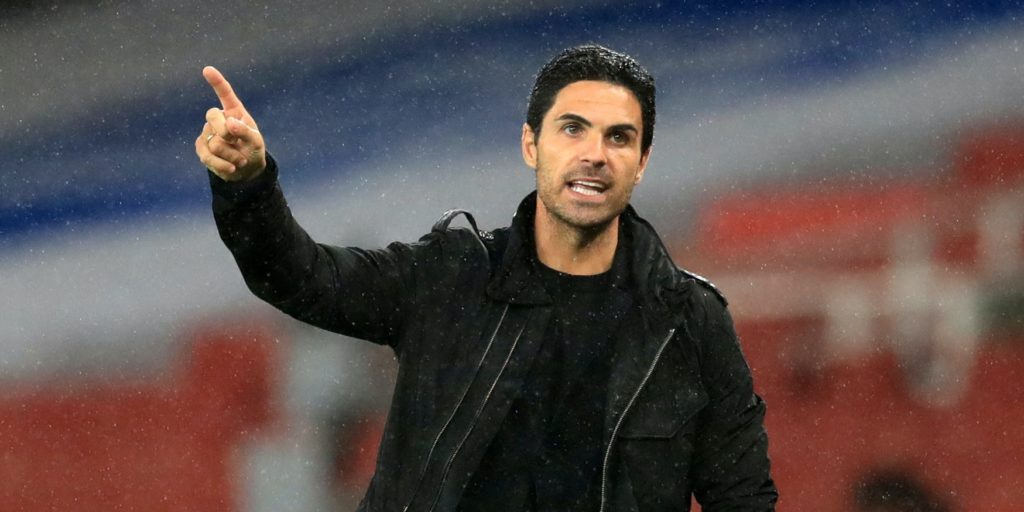 Eddie Nketiah was sent off after he went in late on James Justin.

Arsenal boss Mikel Arteta claimed Leicester should have been reduced to 10 men during the first half as his side drew 1-1 with the Foxes at the Emirates Stadium.

Pierre-Emerick Aubameyang put the Gunners ahead in the 21st minute and they could have been even further in front as Kasper Schmeichel denied Alexandre Lacazette on two occasions.

However, the turning point came shortly after Eddie Nketiah replaced the Frenchman in the 71st minute, as the Arsenal youngster went in late on James Justin.

Nketiah was initially shown a yellow card before VAR intervened, with referee Chris Kavanagh using the pitchside monitor to review the decision and award a red card instead.

Leicester piled on the pressure with their numerical advantage and it eventually told as Jamie Vardy took his Premier League tally to 22 for the season and earned a point for Brendan Rodgers’ side.

But counterpart Arteta was furious that a collision between Shkodran Mustafi and Vardy, where the striker’s boot struck the Arsenal defender in the face, albeit accidentally, did not warrant the same punishment.

Arteta told Sky Sports: “If (Nketiah) can be a red card then Leicester has to play with 10 men after 42 minutes – that has to be a red card as well.”

The Gunners boss admitted frustration at his side’s inability to make the most of their first-half chances and seal victory before the sending-off.

He added: “I am extremely proud of our team and how dominant we were in the first half – we should have gone three or four up and killed the game.

“We have to learn that when you play this type of opponent you have to kill them when you have them.”

Rodgers, however, had no doubt Nketiah deserved his dismissal and also praised his side for showing the courage to fight back and claim a point which he believes will keep their “spirit” intact.

Rodgers said: “It was a clear red card – I don’t think young Eddie tried to make the challenge that he did, but you can clearly see the ball has bounced up and he’s stretched his leg and I’m just thankful JJ wasn’t injured worse than the challenge he had.

“We just needed to come together at half-time and reinforce a few items and I thought in the second half we were outstanding.

“I was really pleased how we managed with 11 v 10 – we kept our patience and got a deserved goal, and if we could have made that final pass a bit cleaner we could have gone on and won the game.”

Referencing the potential importance of the result, Rodgers added: “I think it’s huge for us – Arsenal have been on a really good run but we’ve been able to come here after a tough game at the weekend and play well.

“We couldn’t win the game but we didn’t lose it, so it’s really good for the spirit. It gives us great confidence to continue with this mindset.”

Vardy believes Leicester can take heart from their point.

He told Sky Sports: “I think we’ve got to take pride at getting back into the game.

“We started the game well, we went 1-0 down and started panicking a bit, so it was about coming back out for the second half and showing what we can do.

“It was just important to get a result. We got the win at the weekend and it was about keeping the momentum going, and (now) back in and focus for next week.”