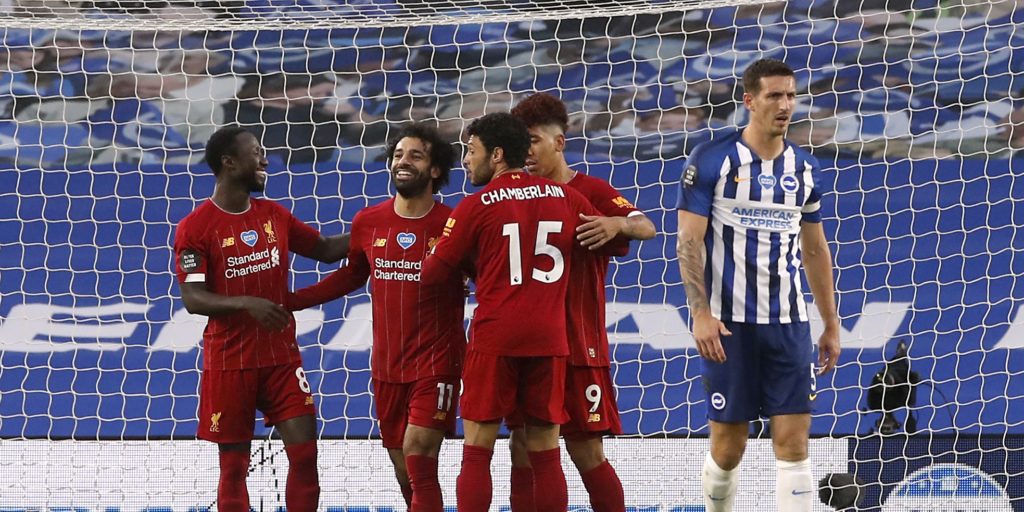 The Egypt forward scored twice in a battling win at Brighton.

Mohamed Salah scored twice as Liverpool boosted their hopes of breaking the Premier League points record by battling to a 3-1 success against Brighton.

But the visitors were made to dig deep for their 30th league victory of an unforgettable season after the Seagulls fought back and deservedly halved the deficit through Leandro Trossard just before the break.

Reds top scorer Salah made the points safe 14 minutes from time by heading home his 19th league goal of another prolific campaign, while Klopp was left with some cause for concern after Henderson limped off late on.

Albion may well feel aggrieved to finish empty handed but paid a heavy price for their sloppy start and remain without a win against Liverpool in any competition since January 1984.

The Seagulls stay nine points clear of relegation zone, albeit having played a game more than both 18th-placed Aston Villa and second-bottom Bournemouth.

The Reds arrived on the south coast having gone five away games in all competitions without scoring.

After being afforded a guard of honour from their opponents for the third successive game, the visitors quickly halted that run during a flying start.

Salah claimed the sixth-minute opener, emphatically dispatching the ball into the bottom left corner after the dawdling Davy Propper was dispossessed on the edge of his own box by Naby Keita.

Albion’s attempts to play out from defence were admirable but they were again caught out less than three minutes later.

Seagulls defender Adam Webster was at fault on this occasion, overrunning the ball in midfield before the ball fell for Henderson to stylishly curl home from 20 yards.

Brighton could have been forgiven for fearing the worst but they regrouped and gradually grew into the game, with Trossard the primary threat.

The lively Belgian winger was twice denied by last-ditch blocks, while his marauding run down the left flank led to Liverpool goalkeeper Alisson Becker being forced to deny Neal Maupay.

Graham Potter’s men gave themselves hope of mounting a fightback by pulling one back moments before half-time.

Seagulls defender Tariq Lamptey took advantage of Williams being out of position to deliver a low cross from the right and Trossard, who claimed the winner at Norwich on Saturday, thumped home on the half volley.

Williams endured a mixed full debut and, having been booked, was substituted at half-time, with Andy Robertson coming on.

Brighton had gone into the game almost assured of a fourth successive season in the top-flight having taken an impressive seven points from 12 since the restart.

They wasted a golden chance to equalise on the hour mark when unmarked defender Dan Burn scuffed an effort towards goal and saw it hacked away by Georginio Wijnaldum following a partially-cleared corner.

Liverpool were in desperate need of a third to quash the hosts’ hopes and it duly arrived in the 76th minute.

Substitute Robertson delivered an inviting inswinging corner from the right and Salah found space at the near post to glance home.

Henderson then limped off with an apparent injury 10 minutes from time, with James Milner coming on for his 536th Premier League outing to climb to fifth in the competition’s all-time appearance rankings.

Salah wasted two fine late opportunities to clinch a hat-trick but the misses mattered little as Liverpool marched on in their pursuit of a record points haul.