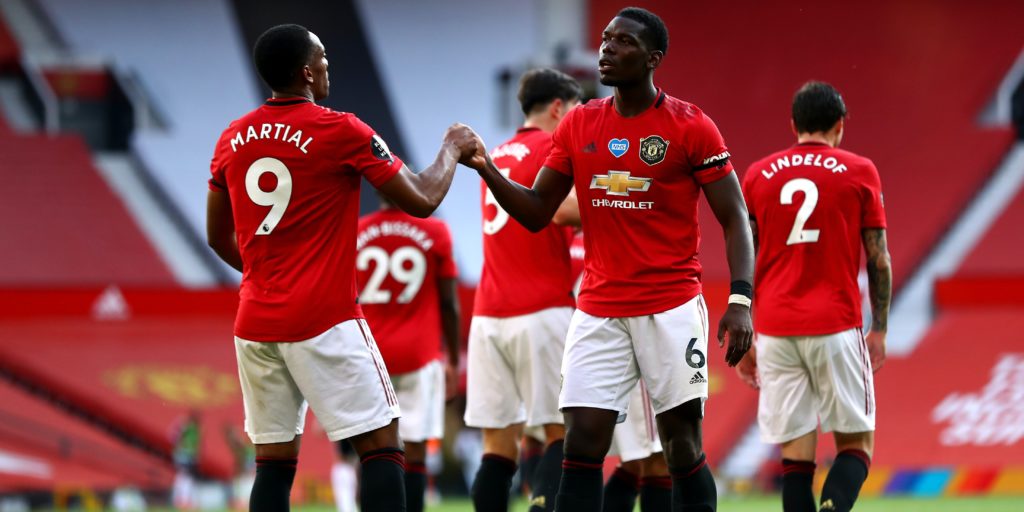 Paul Pogba says he is enjoying playing in Manchester United’s reinvigorated side following his return from injury.

In front of them Anthony Martial, Marcus Rashford and Mason Greenwood have thrived as United have made a sustained push for a top-four place in the Premier League.

Prior to the stoppage in the season, Pogba had made just two appearances for United since September due to an ankle problem.

The 27-year-old Frenchman told United Review: “You can tell that the team is improving a lot. We play more as a team than we did before, we enjoy it even more, we defend together, we attack together, and this team is stronger as well.

“From behind I just enjoy it. I’m enjoying just watching Bruno, Rashford, Martial and Mason, who all played the last game, and seeing them score goals.

“You just keep applauding, it’s beautiful… they make me enjoy football every time.”

Pogba’s future has been the subject of recurring speculation as he enters the final year of his contract – although United do have the option of a 12-month extension – but there are growing suggestions the player is prepared to discuss a new deal.

Pogba did not speak about that but made clear how happy he is to be back in the United side.

Pogba, who rejoined the club for GBP 89million from Juventus in 2016, said: “Just being back training, touching the ball and doing what I love is amazing. I missed it so much.

“You realise when you’re out for a long time how much you really enjoy playing football and how much you love it.

“So obviously I’m really, really happy and so blessed to be back and be fully fit now, and I’m enjoying being back with the team.”

Manager Ole Gunnar Solskjaer said on Wednesday “of course we want to keep the best players around” when asked about possible new contract talks with Pogba.