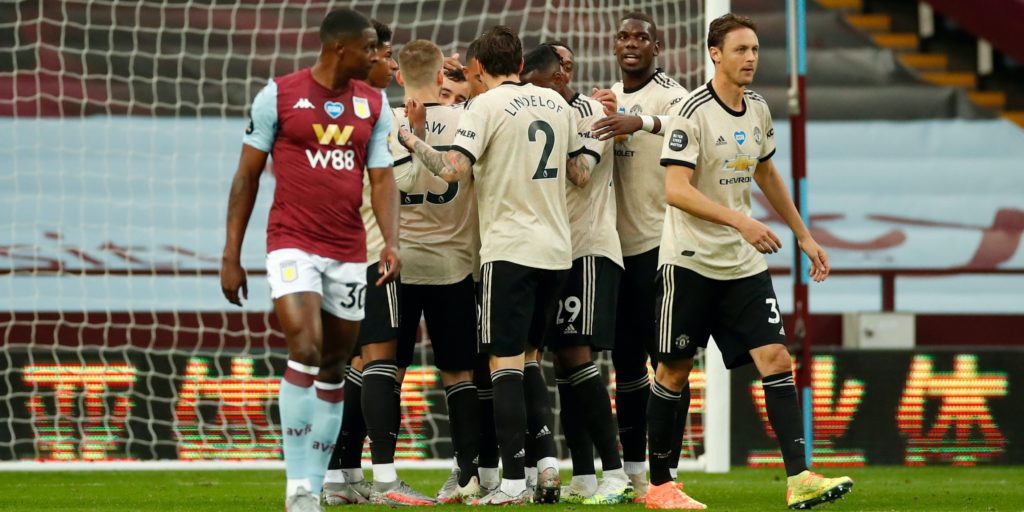 Bruno Fernandes’ controversial penalty and strikes from Mason Greenwood and Paul Pogba sealed a comfortable 3-0 victory for United at Villa Park on Thursday.

The game turned when referee Jon Moss gave United a 27th-minute spot-kick, even though Fernandes appeared to tread on Ezri Konsa.

The decision was rubber stamped by VAR official Graham Scott and Smith questioned the call which compounded their relegation fears.

He said: “How someone in the studio who had the view I had only once can make that decision is beyond me. Five minutes after the game the 100 messages I’ve had from people who have watched it telling me it’s a disgraceful decision tells me my feelings were right.

“I went down to the dugout and saw it on the camera and thought it would be overturned straight away. Anyone in football knows Fernandes is trying the dragback, he puts his foot on the ball and stands on Ezri.

“We always felt that was what VAR was brought in for (to get decisions right) but obviously it’s still becoming human error, going from one man’s opinion to another.

“There have been some really poor VAR decisions this season, which is unfortunate for a system which was supposed to help the big decisions.”

Solskjaer disagreed and felt the penalty – United’s 13th of the season – was justified.

“He’s done a Zidane turn and the boy (Konsa) has stuck his leg out and Bruno has landed on him,” he said. “If I try to jump away from someone and I land on someone who has tried to tackle me it’s a penalty. For me it’s a penalty.”

Villa started brightly and United initially struggled, but the hosts unravelled once Fernandes made it 1-0 from 12 yards.

They failed to harness their anger properly and Greenwood rattled in a second from 20 yards after a quick United break in first-half injury time.

United then strolled to victory with Pogba scoring his first goal since April 2019, curling in from the edge of the box after 58 minutes.

Anthony Martial hit the bar and Pepe Reina denied Marcus Rashford late on, and Solskjaer wants his men to be more clinical, despite them having scored 100 times this season.

“I think we could have scored many, many more goals and we’re keeping clean sheets,” he said, with United now a point behind fourth-placed Leicester in the Premier League.

“Hopefully the goal difference won’t be the deciding factor in the end because we should have had 10 more goals the last two games.”

Villa remain four points from safety with four games left ahead of Sunday’s visit of Crystal Palace, with Smith still backing his players to survive.

He said: “They are all big games. Every Aston Villa fan in their hearts didn’t expect too much from Liverpool and Manchester United, but there is an awful lot of belief in the dressing room.

“We know the last four games are going to be very big and we have to be very competitive in those games. They are not in top form that Liverpool and Manchester United are.”