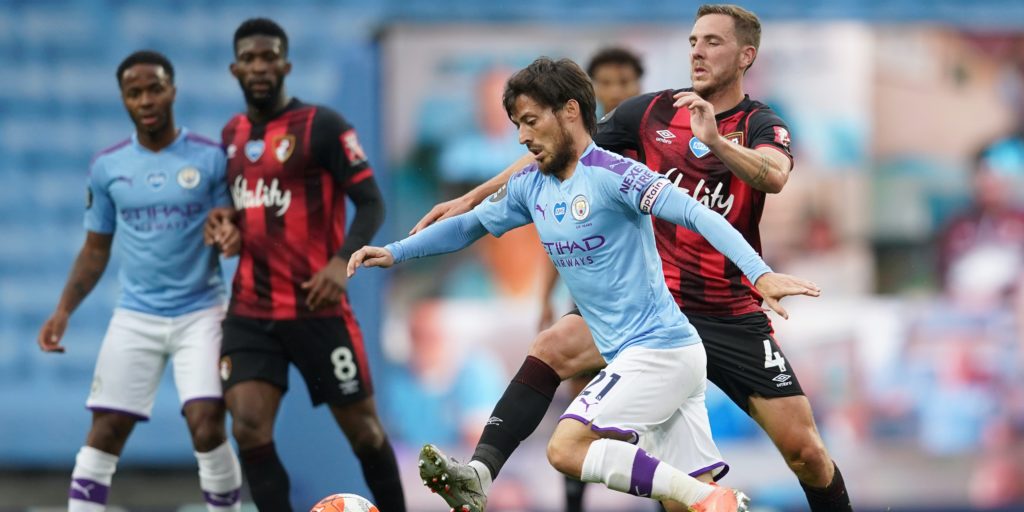 Eddie Howe’s side produced a spirited performance at the Etihad Stadium.

Bournemouth gave everything but were left needing a dramatic turnaround in their final two matches after a 2-1 defeat at Manchester City pushed them closer to relegation.

Eddie Howe’s side produced a spirited performance at the Etihad Stadium but first-half goals from David Silva and Gabriel Jesus undid them despite a late David Brooks reply.

The loss left the Cherries three points off safety having played a game more than West Ham and Watford – who face each other on Friday – above them.

With an inferior goal difference as well, it will now take a monumental change of fortune to extend their top-flight adventure into a sixth season.

They may wonder what position they might have been in had they shown the same spirit they showed against City all season.

They had numerous chances when trailing only 1-0 and continued to push in the second half against a City side showing six changes and with one eye on their FA Cup semi-final at the weekend.

Bournemouth threw caution to the wind in the latter stages and will feel they deserved an equaliser but fell short.

Ultimately City had the quality when it mattered, the soon-to-depart veteran Silva curling in another fine free-kick and Jesus rifling in a second. The result made for a good few days for City after Monday’s victory at the Court of Arbitration for Sport.

The sprightly Silva certainly looked far younger than his 34 years. He was soon into the action and underlined his mastery with a fine free-kick on six minutes after he himself had been fouled by Jefferson Lerma.

City threatened again as Fernandinho sent a low drive wide but Bournemouth, realising their time could be almost up, rallied well.

Josh King went close with a shot on the turn and Dominic Solanke had an effort blocked before Junior Stanislas forced Ederson to palm onto the post with a vicious free-kick. Solanke had another chance moments later but Nicolas Otamendi denied him with a last-ditch block.

They were chances the hosts were to rue before the break as Silva combined with Jesus for the Brazilian to double the lead, showing great footwork before rifling a shot into the bottom corner.

It could have immediately got worse for Cherries when Lerma appeared to clip Jesus’ ankle in the box but neither referee Lee Mason nor the VAR intervened.

Bournemouth roused themselves again in the second half and thought they had hope when King turned in a Stanislas ball at the far post but the flag was raised for offside. VAR showed it was an agonisingly close decision for the visitors.

VAR was called upon again after Jesus was awarded a penalty following a challenge by Cook and, after several replays, overturned the decision.

Bournemouth dug in for one last rally and substitute Brooks gave them late hope when he turned in another good run by Callum Wilson in the 88th minute.

They continued to apply pressure in into injury time but City held on.