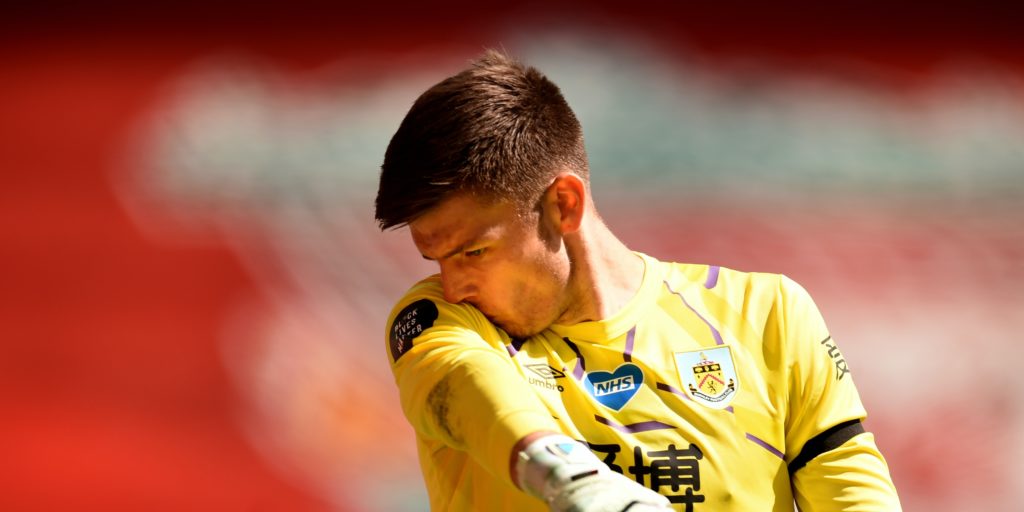 Johann Gudmundsson crashed a late shot against the woodwork as Burnley almost snatched an unlikely win.

Burnley became the first team to prevent Liverpool winning in the league at Anfield this season as their 1-1 draw ended hopes of an historic 100 per cent home record.

The game was one of the most one-sided 1-0s imaginable after Andy Robertson’s opener but a combination of the brilliance of Clarets goalkeeper Nick Pope and wayward finishing cost Jurgen Klopp’s side before Jay Rodgriguez’s equaliser.

That goal also put a dent in the Premier League champions’ quest to break Manchester City’s 100-point record, now requiring victories in their final three matches if they are set a new mark of 102.

And Liverpool were also the width of a crossbar away from losing their proud three-year, 58-game unbeaten home league record after Johann Gudmundsson crashed a late shot against the woodwork.

There was the unusual feeling of the hosts hanging on at the end as Burnley – the first team to take a point at Anfield in 25 matches since Leicester in January 2019 – suddenly found their confidence, leaving Klopp to voice his frustrations at referee David Coote at the final whistle.

In his programme notes the manager had expressed his concern about the workload players have been put under since the restart, writing about a “responsibility to look after their health and wellbeing” and that “money does not heal a serious injury”, in reference to the millions clubs get in television revenue.

With that in mind he made four changes from Wednesday’s win at Brighton, resting Trent Alexander-Arnold in favour of Neco Williams and handing fellow 19-year-old Curtis Jones his full Premier League debut.

Liverpool took full advantage of that as senior full-back Robertson, rested in midweek, took it upon himself to lead the attack from the flank.

Cross after cross was fired in from the left as Burnley struggled to lay a touch on their opponents, never mind get the ball off them.

Sean Dyche’s side were bypassed so easily by some quick, one-touch passing moves that they committed only one foul in the opening 45 minutes despite having to defend 73 per cent possession by their hosts.

Had it not been for Pope single-handedly attempting to keep the Clarets in the game, Mohamed Salah out of the race for the Golden Boot and himself in the lead for most Premier League clean sheets this season, the Reds could have been out of sight.

While he achieved the first two to some extent, denying Salah twice, once from a volley and another with his legs as the Egyptian cut in onto his left foot, he could not extend his advantage in the third.

His second save from Salah led to a corner and from the breakdown Fabinho lofted a delicate pass to the far post where Robertson, coming back from corner duties, produced a curving header back across goal and inside the far post.

Emboldened by only his second league goal of the season, both headers, the Scotland international’s ambitious 50-yard pass across his own penalty area with his right foot was intercepted and Liverpool were lucky to escape with only the concession of a corner.

However, it was a momentary blip and moments later he was tearing down the left win again to deliver a teasing low cross-shot which drifted just wide of the far post and then crossing for Salah to tee up Mane for Pope to save again at full-stretch.

Liverpool’s dominance continued in the second half as Roberto Firmino hit a post, after Mane and Salah combined brilliantly, and the improving Jones, Fabinho and Salah all had chances.

And they were made to pay for those misses as a defensive lapse saw them fail to deal with a 60-yard punted free-kick into their penalty area as Rodriguez fired home James Tarkowski’s knock on.

Pope continued to frustrate the hosts, denying Alexander-Arnold and Mane, but it was Burnley substitute Gudmundsson who almost snatched a remarkable win.