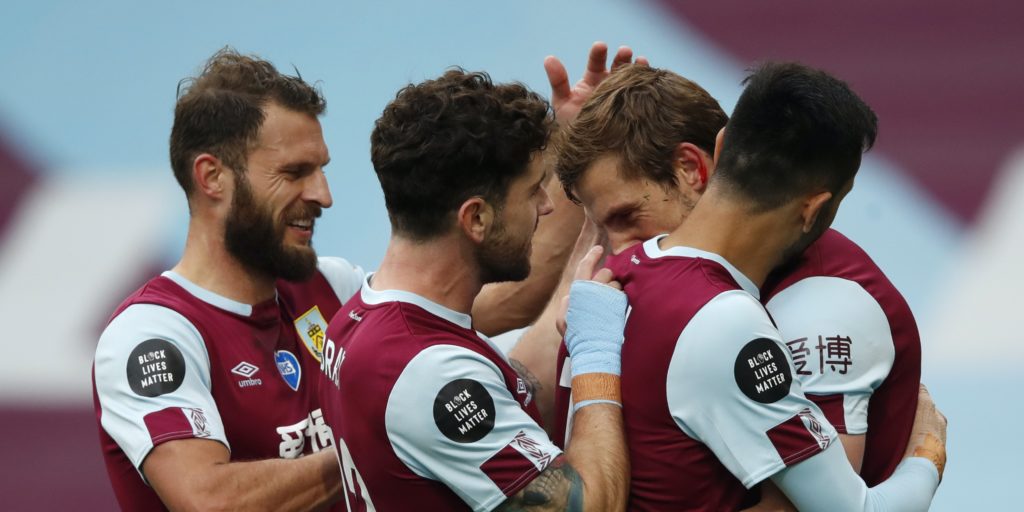 Raul Jimenez’s 75th minute strike appeared to have boosted Wolves’ Champions League hopes, but Burnley refused to roll over as they extended an undefeated home league run that stretches back to New Year’s Day.

Wood, having missed a sitter moments before, went for an ambitious overhead kick in the area and drew a handball from Matt Doherty. Wolves appealed for a high boot and VAR took a long look before Wood fired his spot-kick into the top corner.

The result means Wolves are only three points off the top four, having played a game more than Leicester and Manchester United, but also under pressure from behind, with Spurs one point back and Sheffield United two back in seventh. Burnley are five points back in ninth.

Burnley’s impressive form since the restart had seen them cut the gap to the Europa League places considerably in the table. However, the visitors made the differences look bigger on the pitch as they dominated the early going.

Adama Traore, restored the starting line-up in one of four changes from the weekend win over Everton, carried the threat as he ran at Charlie Taylor again and again, and it was from a Traore cross that Wolves created their first chance as Jimenez headed straight at Nick Pope.

Burnley were slow to grow into the game, their possession gradually increasing but the rare glimpses of goal only coming on the break.

When Conor Coady failed to deal with a hopeful punt forward under pressure from Jay Rodriguez, the ball fell for Wood but he shot directly at his strike partner.

Traore had a new defender to terrorise when Taylor was forced off injured after half an hour, with Erik Pieters slotting in as Johann Gudmundsson came on in midfield.

Traore duly beat him at the first attempt, but Wolves’ next chance came from the opposite flank as Daniel Podence picked out the run of Diogo Jota, who found the side-netting as he shot on the turn.

Burnley might have led at the break as they sprang forward on a counter-attack, with Gudmundsson playing a sweeping ball to Rodriguez before Coady charged down the shot.

Wolves were straight back on to the front foot as the second half began. The ball came to Traore on the right side of the area but he went for power from a tight angle and rifled the ball across the face of goal.

Burnley lost Rodriguez to an injury early in the half, bringing on Matej Vydra, and things almost got worse as Wolves tried to hit them on the break, Jimenez firing a shot over as they quickly moved the ball forward.

The game was opening up at both ends. Josh Brownhill saw a close-range effort deflected wide before Ruben Neves hit a volley straight at Pope and Podence missed the the target after Pieters’ mistake gifted Wolves the ball.

The breakthrough came in the 75th minute. Traore fed substitute Doherty who saw his shot from the edge of the area charged down.

But the ball span over to Jimemez who did not even let it drop before lashing a shot beyond the helpless Pope.

Wood should have headed in an equaliser when Vydra pulled the ball back to him in front of an open goal, only for the New Zealander to head wide.

But he made amends moments later to add another twist to the battle for Europe.