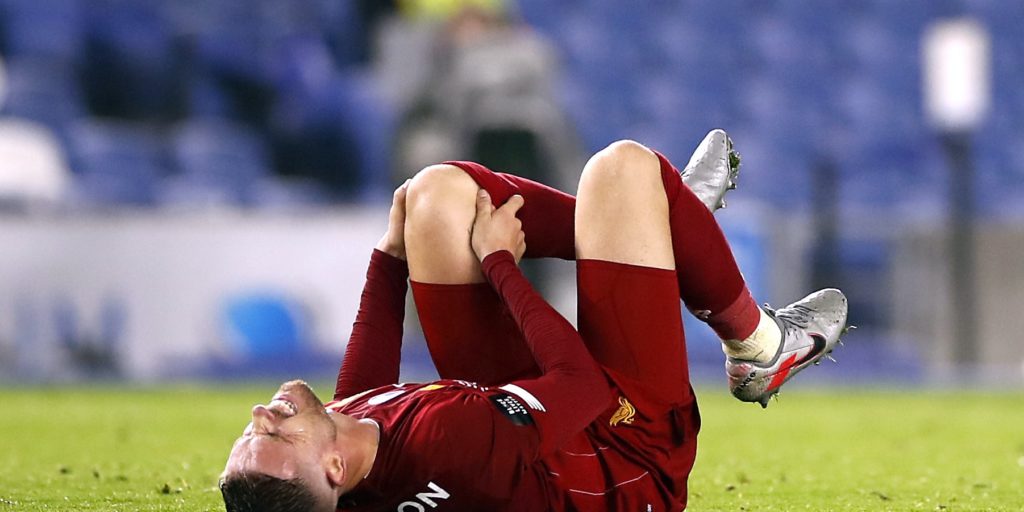 The midfielder suffered a knee problem against Brighton.

Liverpool captain Jordan Henderson will miss the end of the season with a knee injury but manager Jurgen Klopp insists it will not stop him lifting the Premier League trophy.

The England international was forced off 10 minutes from the end of Wednesday’s win at Brighton after a collision with Yves Bissouma and a scan has revealed a knee problem which will keep him out of the club’s remaining four matches.

But Klopp is confident it will not impact on next season – and will definitely not stop him standing on the podium at the club’s final home match against Chelsea later this month to celebrate ending 30 years without a title.

“Hendo is the best possible of all bad news: it is a knee injury but no surgery needed,” said Klopp.

“He will not play any more in the latter stages of this season but I am pretty positive he will start with us the new season.

“It was an awful moment when he went down with injury. In Germany, we would call him an animal as he deals with pain so well.

“You saw he knew something happened which shouldn’t have happened. Everyone felt for him. It was a real mood killer.

“We were all concerned when we saw him going down and he left the pitch and when we got the news it was a big relief for all of us.

“It is not cool but it is the best we could get, Hendo is a quick healer and he will be back soon.

Henderson is determined to come back stronger, writing on Instagram: “Of course it’s not the way I’d have preferred to have finished the season on a personal level.

“I’m sure the lads will ensure we finish the season off on a high.”

They have a 100 per cent record at Anfield this season and are aiming to become the first team since Brentford (21 out of 21) in Division 3 North in 1929-30 to win every home league game of a season.

There are other records to chase as the Reds – currently on 92 points – have Manchester City’s 100-point tally in their sights, while on the individual front Mohamed Salah is looking for a third successive Golden Boot, sitting three behind current Premier League leader Jamie Vardy.

Salah needs just one goal to become the first Liverpool player since Roger Hunt in 1965-66 – and only the fourth in the club’s history – to register 20 league goals in three successive seasons.

The Egyptian has scored 73 goals and made 27 assists in 104 league appearances for Liverpool.

“Mo now, of course, come on. The numbers are absolutely crazy,” added Klopp. “Involved in 100 goals since he is here, 73 and 27, it’s just outstanding. World-class numbers. Nobody should be surprised any more.”

Salah scored twice against Brighton and for his first it appeared Roberto Firmino passed up the chance to shoot to allow his team-mate to come in behind him.

However, Klopp dismissed suggestions the players were collaborating to get Salah’s tally up.

“I hope they were not. When I saw the situation, it was just that Bobby’s football intelligence told him he was not in the best position and that Mo was in a much better position,” said the Reds boss.

“I don’t think he left the ball because he wants Mo to win the Golden Boot. You cannot have this mindset.

“We all help each other. We have another contender with Sadio (Mane). He has 16 goals.

“They all want to score goals. Bobby wants to score. They want to be decisive, to decide football games. That’s the mindset a striker needs.”