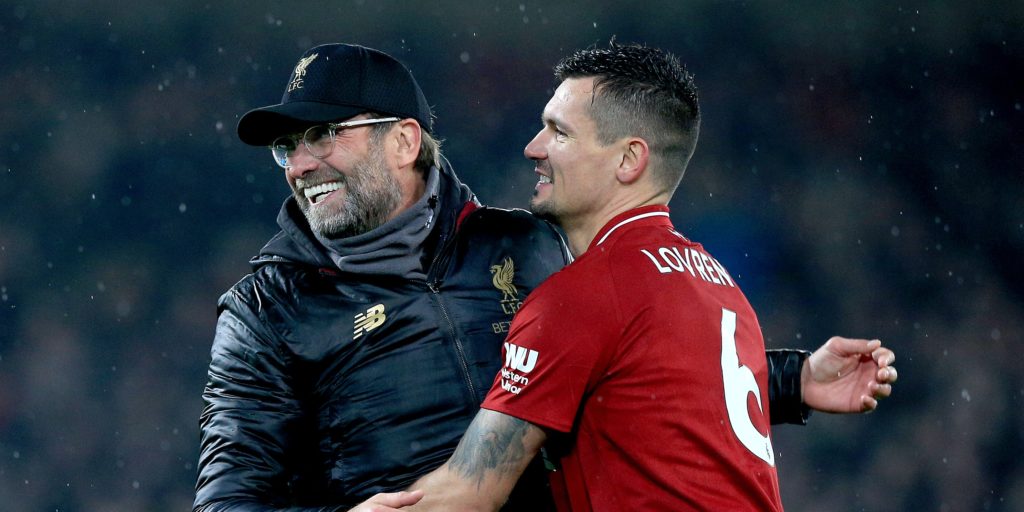 The Croatian defender is out of contract next summer but the Reds have an option to extend his current deal by 12 months.

Liverpool manager Jurgen Klopp insists defender Dejan Lovren still has an important part to play amid speculation over his future.

Zenit St Petersburg have been linked with a move for the centre-back, hoping for a cut-price deal. The Croatian is out of contract next summer but the Reds have an option to extend his current deal by 12 months.

It looks like they will do that and whether it is to safeguard his transfer fee or to utilise him until 2022 Klopp believes the 31-year-old, who due to injury and the form of Joe Gomez and Joel Matip has made only 15 appearances this season, can offer something.

“He has been injured a couple of times (this season) and wasn’t available but Dejan played outstanding games for us,” said the German.

“He is a very important part of the squad. We have four centre-halves and we play usually with two of them, but we have needed all four always.

“Dejan has a very important role for us. He has played in a Champions League final, in a lot of big games, he is a very reliable player.

“There is a value to his experience, absolutely. Since I’ve been in here, Dejan was always either in the team, close to the team or not available.

“There was never anything else, we have never had any problems.

“There is nothing to discuss in public about his contract situation. The situation is absolutely clear – Dejan is a player of LFC and we need him.

“You need the quality we have at centre-half to be successful.”

While Lovren’s future may be far from clear there is no doubt about the longevity of Liverpool’s famed front three of Mohamed Salah, Sadio Mane and Roberto Firmino.

Ahead of the trip to Arsenal Salah needs just one goal to become the first Liverpool player since Roger Hunt in 1965-66 – and only the fourth in the club’s history – to register 20 league goals in three successive seasons.

Salah, who is set to play his 150th match for the club, and Mane are the first pair of Liverpool players since Hunt and Ian St John in 1963-64 to score 20 goals in all competitions for three consecutive campaigns.

And while Firmino has not had his best season in front of goal Klopp has previously praised the work he does which allows his fellow forwards to benefit.

“You cannot change the world alone but together with the right people around you, you have a better chance to do it,” he said of Salah’s contribution of 94 goals in 149 games so far.

“I was very positive in the moment when it was clear that we signed him. I remember our talk, when we first met face to face, when we spoke: ‘What’s your favourite position?’, ‘It would be right wing, but Sadio Mane is playing there and he played a pretty good season.’ ‘Yes, he does, but he can play the other wing as well.’

“That was pretty much the start. The idea was clear how we want to play with the boys up front, but it worked out in a manner which we couldn’t have expected.

“They scored now (nearly) 250 goals since, that’s an incredible number.”