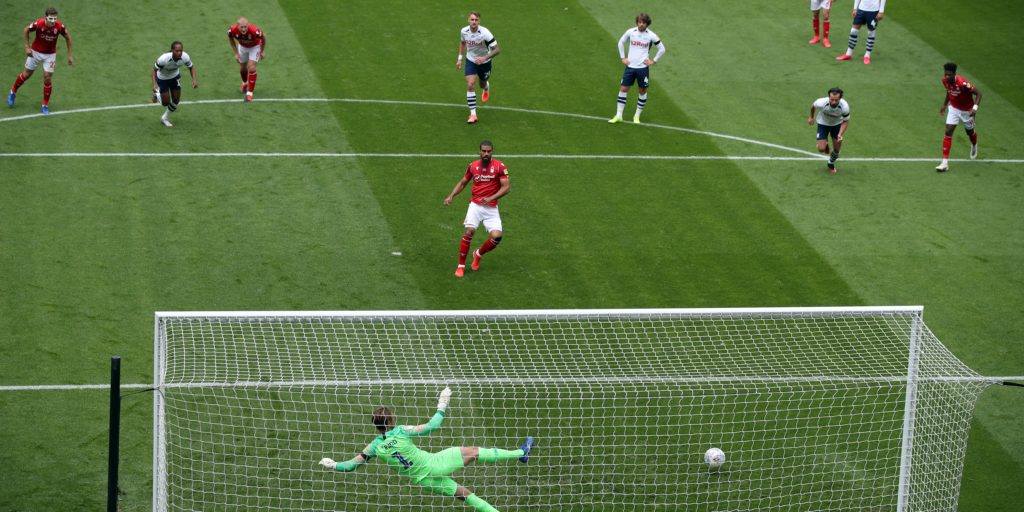 The result left Preston two points outside the play-off positions.

Jayden Stockley cancelled out a Lewis Grabban penalty as play-off chasers Preston and Nottingham Forest fought out a tense 1-1 draw in the Sky Bet Championship.

Grabban struck after just five minutes of what became a tight battle at Deepdale once Stockley had levelled just 10 minutes later.

Preston had the better chances as they pushed for a second-half winner but Patrick Bauer, Stockley and Tom Barkhuizen all had efforts blocked by Forest bodies.

The result left Preston two points outside the play-off positions, having missed a chance to draw back level with sixth-placed Cardiff. With three games remaining, however, they still have a chance.

Fifth-placed Forest had arrived hoping to shore up their play-off position with a victory but, after long spells under pressure, they settled for a point.

Preston had an early chance when Sean Maguire headed over but it was Forest who struck first after Ben Pearson was adjudged to have pushed Nuno Da Costa as he jinked through the box.

The hosts responded well to the setback and levelled quickly. Forest were caught out by some tidy one-touch passing and Brad Potts slid in a low ball from the right and Stockley finished from in front of goal.

A tight first half ensued with chances at a premium although Sammy Ameobi, who was wasteful with an earlier free-kick, went close with a dipping shot over the Preston bar.

Preston suffered a double blow before the break as Ben Davies was forced off injured and Pearson was left limping following a heavy collision with team-mate Maguire.

He did not return for the second half either but Preston coped well, with Potts firing narrowly over before Bauer had a bullet header blocked on the line by Ben Watson.

Another good chance fell to Potts just after the hour as Stockley flicked on a long ball from Rudd but Carl Jenkinson made an even greater defensive intervention to block his goalbound shot.

Forest almost made the most of that reprieve but Ameobi again narrowly missed the target with another dangerous-looking effort.

Preston squandered another good chance soon after when substitute Barkhuizen missed his kick in front of goal from a Maguire flick.

Preston pushed to the end but Barkuizen missed out again when another Forest player in Michael Dawson managed to get in the way of a goalbound shot.