Home News Southampton have nothing to lose at Old Trafford, says Ralph Hasenhuttl

Southampton have nothing to lose at Old Trafford, says Ralph Hasenhuttl 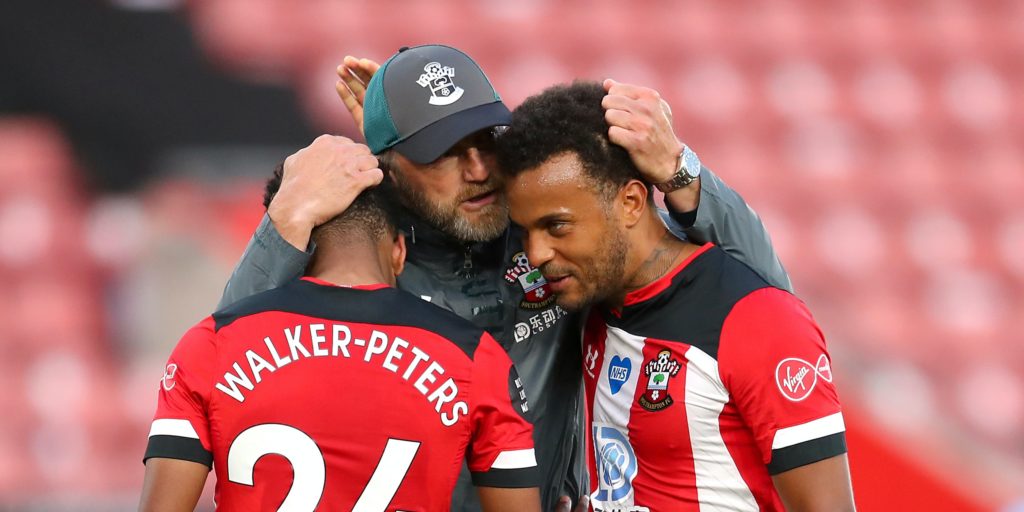 Manchester United go into the match in a rich vein of form.

Ralph Hasenhuttl has told his Southampton players they have nothing to lose away to Manchester United on Monday.

The Saints travel to Old Trafford unbeaten in three Premier League games, but they will come up against a United side in imperious form.

Ole Gunnar Solskjaer’s men have been hugely impressive since football resumed and January signing Bruno Fernandes has played a key part in them winning their last four league matches by a margin of three goals or more.

Southampton’s away form, though, has been strong this term and they did beat United at Old Trafford in January 2016.

Hasenhuttl said: “What can you lose? You can only win. Everybody thinks they will win the game. They will show us how strong they are and this is exactly what we need to face.

“To have a challenge is what we like most. This is exactly what we want to have. Everybody knows that they are strong at the moment and we go there and have a not so bad away record this season. We showed some really good games there.

“We like to have this challenge. Even though it’s the third game in a week, we play on Monday and both teams have one day more to rest. It’s a big game on Monday evening. Everybody can enjoy this game and we will, absolutely.”

If Southampton are to record a positive result at Old Trafford, they will have to find a way of stopping United’s in-form forwards.

Anthony Martial, Marcus Rashford and Mason Greenwood have all netted in recent successes, with 18-year-old Greenword on target in three consecutive games.

He is the latest English youngster making his mark in the top flight, which only bodes well for Three Lions boss Gareth Southgate.

But, even though Hasenhuttl believes the players coming through in the UK are promising talents, he pointed out they are not the only country producing a strong crop of youngsters.

“This run of talents is not only in England. Also in Germany, in other countries,” the Saints manager added.

“In all the countries, they build their academies and the development of the young players is getting better and better. It’s not so one dimensional, it’s multi-dimensional. This development, in the end, makes for better players.

“All the managers in the youth are doing quite a good job. It’s not a coincidence. Nothing in the world comes like this right away, so you have to work on it. They do quite a good job and that’s why you get so much talent growing up here.

“They get physically strong here and, if they have the right mindset, which is the most important thing and that they don’t want to get too big too quick, then you have a lot of possibilities in England to be a very good football player.”

Saints forward Danny Ings will look to become only the third Southampton player to hit the 20-goal mark in the Premier League at Old Trafford.