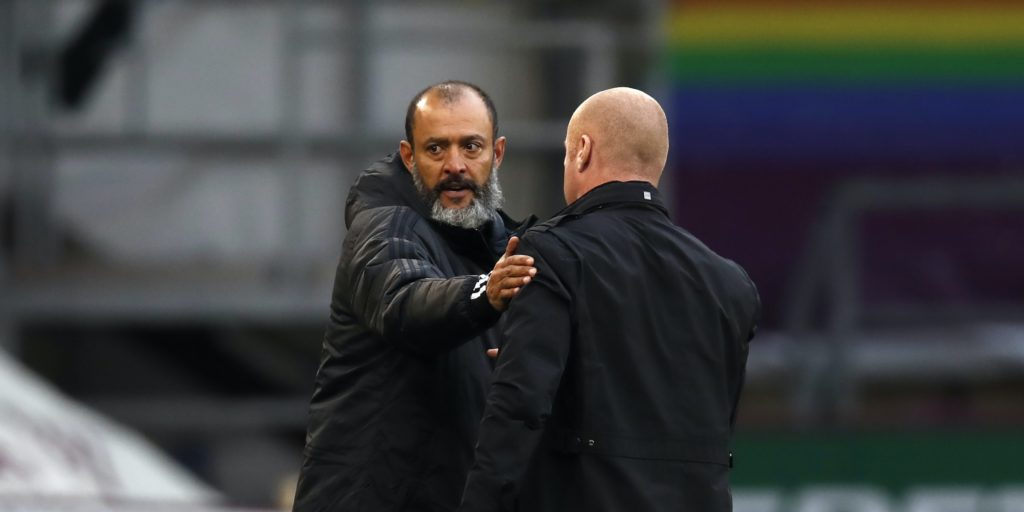 Burnley salvaged a point at the death.

Raul Jimenez’s 75th-minute strike had Wolves on course to keep the pressure on Manchester United and Leicester above them in the scramble for European places, but moments after missing a sitter for Burnley, Wood scored from the spot to earn a point.

“Every goal you concede is hard to take and if it is in the final moments it is even harder,” said Nuno, whose side now need to make sure they do not let slip a Europa League place with Tottenham and Sheffield United close behind them.

“I think we played good, we were well organised on the pitch and it was a good game. The team were always in control, we managed the game well. You try to prepare good but after that sometimes justice in the game doesn’t exist.

Nuno said he had not seen the incident which led to the penalty, which came amid a frantic five minutes of time added on.

Wood, having inexplicably headed wide of an open goal seconds earlier, went for an ambitious overhead kick in the fourth minute of time added on, but as he missed the ball it struck the arm of Wolves substitute Matt Doherty.

Mike Dean pointed to the spot, and after a lengthy VAR check, Wood – recently back from injury – fired into the top right corner of the goal.

“It’s another interesting twist that goes our way, and we worked to make it do so,” said Sean Dyche, whose side remain unbeaten at home in the league since New Year’s Day. “It was another good finish to a strange game.

“It was great mentality from Woody. He’s getting back into playing, it was great to get 90 minutes out of him as he’s getting stronger and strong. When he missed that chance, it shows you what a strong character he is to step up and take the penalty and finish it in the style he did.”

A draw was almost certainly enough to end Burnley’s own European hopes, leaving them four points behind seventh-placed Tottenham with two games to go.

But Dyche can be proud of their efforts as they stretched their unbeaten run to six games despite an array of issues since the season resumed and going back further, it is now only one defeat in the last 14.

“The Premier League is very unforgiving, and to put that run of games together and put points on the table in that run as well, coming out of a tough run when it started, I can’t speak highly enough of this group,” Dyche said.

“They continue to give more and more to the cause. Players come in and they deliver. There is a relentlessness to what they’re doing. They never seem to know when they’re beaten. They just keep going and they’ve done that again tonight and got another valuable point.”