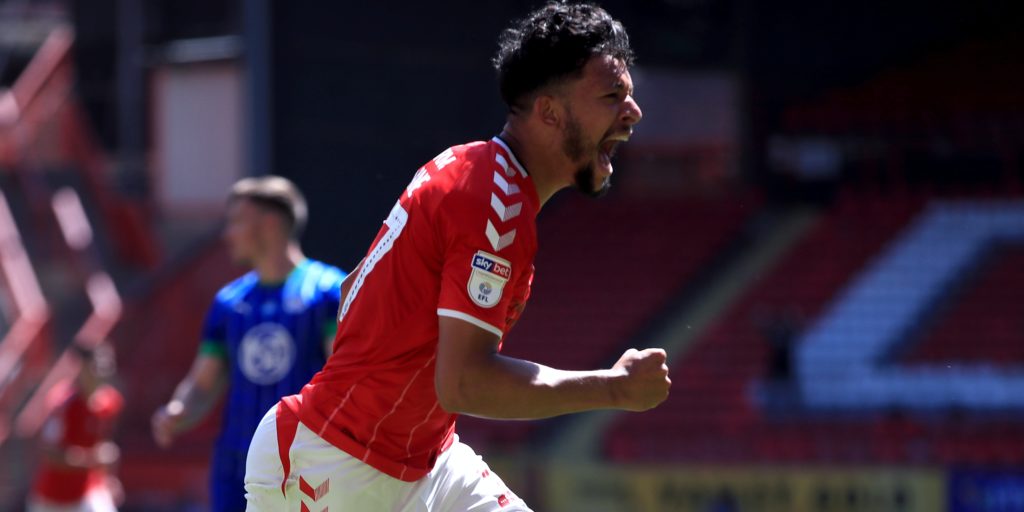 The two relegation rivals played out a 2-2 draw at The Valley.

Macauley Bonne’s 93rd-minute equaliser dented the survival hopes of Wigan and boosted Charlton’s as he earned the hosts a crucial point in an entertaining 2-2 draw in the Sky Bet Championship.

Jamal Lowe and Kieran Dowell had put the administration-hit Latics on track for a sixth win in eight, but Charlton boss Lee Bowyer saw ex-Leyton Orient forward Bonne net late on at The Valley to ensure survival remains in their hands.

Charlton head to champions Leeds on the final day, while Wigan host Fulham knowing they may need a result at the DW Stadium, especially if a looming 12-point deduction is implemented.

Paul Cook named an unchanged team following the 8-0 win over Hull and they picked up where they left off on Tuesday to take an early lead in the capital.

The Addicks gave away possession at the back, which allowed Kal Naismith cross in for Kieffer Moore, and although his header was saved by Dillon Phillips, Lowe was on hand to nod in the loose ball on the line.

Goals had been hard to come by for Bowyer’s side and with the visitors ahead after just nine minutes, it looked like it could be a long way back.

It was the perfect response and only Charlton’s fifth goal since the division was able to resume, and they should have had another in the 27th minute.

The recalled Naby Sarr brought the ball forward on the left and produced a superb crossfield pass to Bonne. He had only David Marshall to beat, but the Wigan goalkeeper stood up tall and was able to thwart his left-footed strike.

Latics defender Nathan Byrne was in the thick of the action soon after. First he chastised Bonne after he went down in the area, and with 35 minutes gone the wing-back almost put through his own net after a dangerous Josh Cullen centre.

Wigan would take advantage of those near-misses as with five minutes of the first half left they went back ahead through Wednesday’s hat-trick hero Dowell.

Antonee Robinson raced clear down the left and found the on-loan Everton midfielder, who clinically converted at the back post.

Charlton reacted at the break, with Albie Morgan and Jonny Williams introduced before forward Chuks Aneke was sent on in the 55th minute.

Defender Sarr tested Marshall with a free-kick on the hour mark, but Wigan, who had kept three clean sheets in a row ahead of this fixture, were now much tighter at the back.

Cook’s men almost made the points safe four minutes later when Moore teed up captain Sam Morsy from a central position, but Phillips got down to save his effort.

The Addicks’ final roll of the dice was to bring on Aiden McGeady for captain Jason Pearce and in the third minute of stoppage time they forced a leveller.

Aneke flicked on Matthews’ diagonal ball and Bonne controlled before slotting into the corner for his 11th of the season and potentially his most precious.