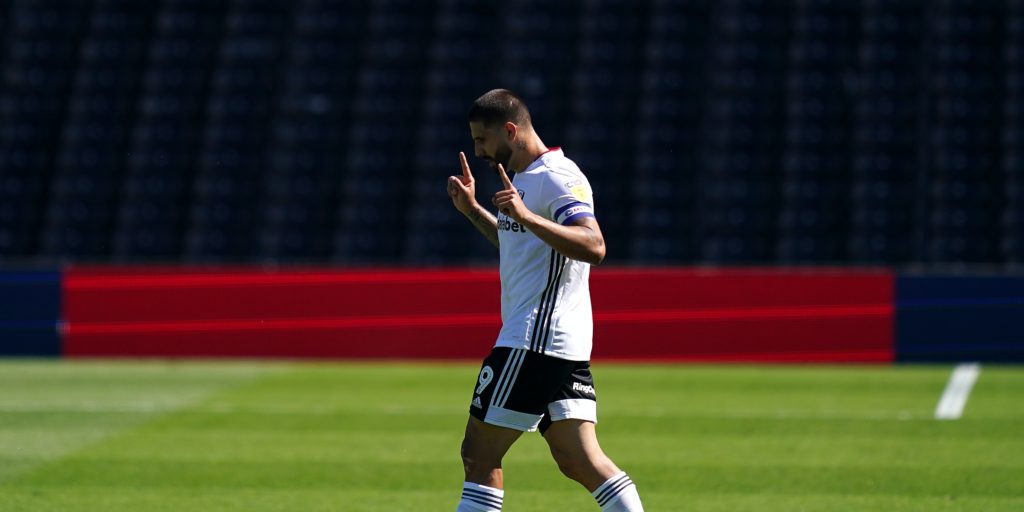 Mitrovic bagged a brace to take his league tally to 26 for the season.

Mitrovic bagged a brace to take his league tally to 26 for the season, overhauling Brentford’s Ollie Watkins again and twisting the knife after the Bees’ 1-0 loss at Stoke.

Neeskens Kebano plundered a double too, drilling his first Fulham goal since December 2017 to end a 35-match scoring drought before slotting a neat free-kick.

Fulham’s comfortable win tees up a nail-biting last round of fixtures on Wednesday night, especially in light of Brentford’s loss at Stoke and West Brom’s shock 2-1 defeat by Huddersfield.

Leeds were crowned Championship winners without even kicking a ball given defeats for the Bees and the Baggies.

But the next offshoot of those results was to leave Fulham still holding a chance of sneaking into second, and an immediate top-flight return.

Fulham sit two points off second-placed West Brom and just one behind Brentford in third, with only Wednesday’s nervy night left to play.

In theory, all three promotion chasers ought to win, which would maintain the status quo, with West Brom going up automatically and rivals Fulham and Brentford heading into the play-offs.

But theory had no regard for Brentford turning a five-match slump without a win before the coronavirus shutdown into eight victories on the spin after the resumption.

Theory had no thought either for Fulham losing their first two games after the return, before now conjuring five wins and a draw in six.

Parker’s five changes could have backfired in the wake of Brentford’s slip-up at Stoke, but any such fears were quickly allayed thanks to Kebano’s thunderbolt.

Only moments earlier Anthony Knockaert had wasted a big opening by overhitting what should have been a simple ball for Mitrovic. Instead of gleefully lapping up a cakewalk in on goal, Fulham skipper Mitrovic was left to rue the scraps of that loose pass.

The Wednesday keeper would later palm away well from Josh Onomah’s stinging half-volley, but had no chance when the same Fulham man threaded a fine ball for captain Mitrovic.

The Serbia hitman almost had time to toast the quality of the supply chain before steadying and drilling home for a fine goal.

Onomah would have made it three with a walk-in had he been able to reach a low cross, but Fulham were not made to wait long to extend their advantage again.

Kebano duped Dominic Iorfa with smart footwork in the area, drawing the foul and penalty to leave the Wednesday defender beating the turf in frustration.

Mitrovic stepped up and thumped home the spot-kick to overhaul Brentford’s Watkins at the top of the league’s scoring charts once again.

Fulham should have been home and hosed when 3-0 up at the break, but started the second-half like a team intent on coasting to the win.

Wednesday replacements Nuhiu and Connor Wickham had other ideas though.

Kosovo striker Nuhiu buried a penalty, before Wickham forced a decent save from Marek Rodak.

Kebano’s free-kick kept Fulham in control, only for Murphy to slot a neat strike and Nuhiu to nod in on the cusp of full-time.

Just when Parker’s men feared a nervous injury time however, up popped replacement Decordova-Reid with a long-range effort, finally cementing the win, although there was still time for Whites midfielder Harrison Reed to be given his marching orders after picking up a second yellow card.