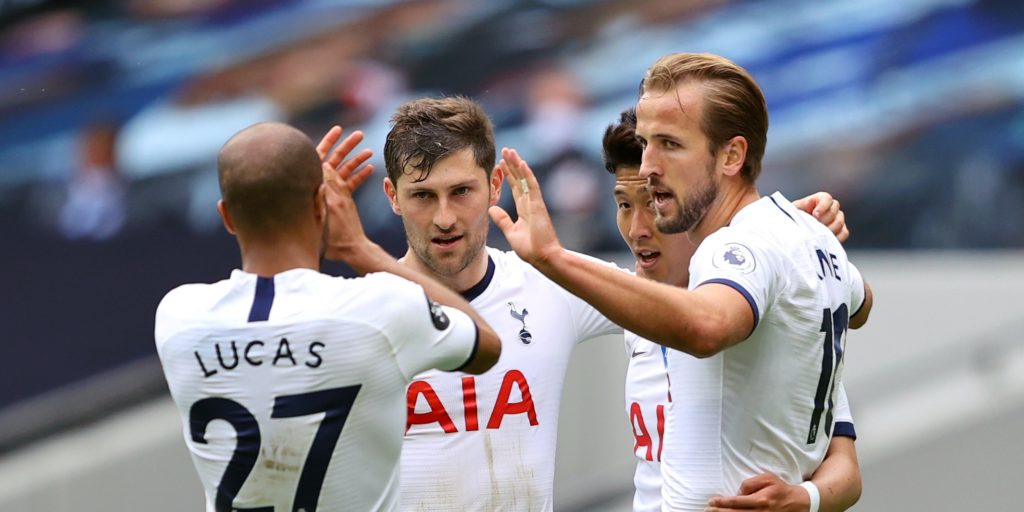 James Justin’s early own goal had put Jose Mourinho’s side ahead.

A Harry Kane masterclass helped Tottenham strengthen their Europa League hopes with a 3-0 win over Leicester, whose own European ambitions suffered a damaging blow.

Kane, who this week revealed his wife is pregnant with their third child, scored two picturebook goals in the first half, after James Justin’s early own goal, to set up the three points that leaves Jose Mourinho’s men in the top six with just one game to go.

And there is little surprise that Kane was the man to inspire it as he simply loves playing Leicester, with his tally now standing at 16 goals in 14 games against the midlands club.

Leicester might also be looking at Europa League qualification after a loss that hands Manchester United the impetus in the race for the Champions League as they remain level on points, but with United still having two games to play.

The Foxes will be watching the match with West Ham on Wednesday with eager eyes, but will know they are likely to have to beat United in next week’s final game of the season if they are to finish in the top four.

Spurs enjoyed the dream start as they took the lead in the sixth minute.

Kane is not only capable of scoring against the Foxes – he was also the architect for the opener.

A brilliant ball set Son Heung-min clear down the left and the South Korean’s shot was cruelly deflected off Justin, wrong-footing Kasper Schmeichel and heading into the bottom corner.

That acted as a wake-up call to Leicester, who found their groove and looked for an immediate response.

Jamie Vardy headed over and then was denied goals on two occasions by fine blocks, first by Toby Alderweireld and then by Ben Davies.

Hugo Lloris then came to the rescue as he produced a fine low save to keep out Ayoze Perez’s volley.

That heroic defending proved vital as Spurs hit their visitors with a two-goal salvo in three minutes before the break to kill the game.

Kane got his first of the afternoon in trademark style to finish a lightning quick counter-attack in the 37th minute.

The hosts cleared a corner and in seconds were up at the other end, with Lucas Moura playing in Kane to slide home a first-time effort.

Moura was again the provider shortly after, as he won back possession, but this was all about Kane.

Picking up Moura’s slightly over-hit pass, he cut inside Ryan Bennett and curled a superb effort inside the far post for his 17th league goal of the season.

It was also his 13th goal in 18 games under Mourinho, rubbishing claims that the Portuguese’s style of play would not suit the England captain.

With the job done, the second half was little more than a training exercise as Spurs saw it out with ease.

Kane had a glimpse at a hat-trick as an outrageous long ball by Moura sent him clear, but Wes Morgan recovered well and got in an important block.

An equally brilliant through-ball by Kane then almost played Son in but the South Korean’s touch let him down.

Leicester did most of the pressing but found the Spurs defence and Lloris in formidable form.