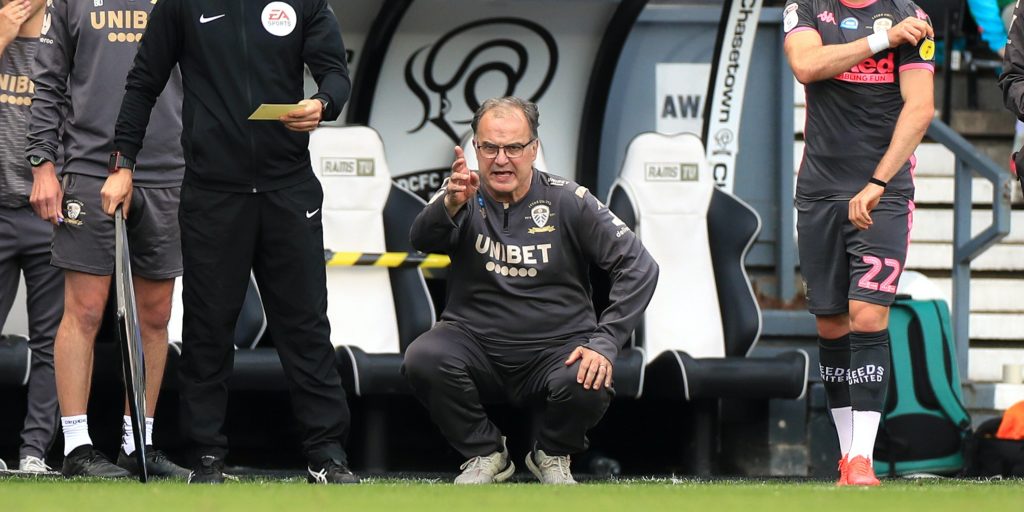 Bielsa has steered Leeds back to the Premier League for the first time in 16 years.

Marcelo Bielsa insisted after Leeds’ 3-1 win at Derby that now was not the time to discuss his own future.

Bielsa has steered Leeds back to the Premier League for the first time in 16 years and they celebrated their Sky Bet Championship title triumph with a 27th league win of the season at Pride Park.

Chris Martin put Derby ahead early in the second half, but a much-changed Leeds side hit back through Pablo Hernandez, Jamie Shackleton’s first senior goal for the club and Matthew Clarke’s own goal.

“I don’t want to put the focus on me because all I said before,” said Bielsa, who made seven changes to the side which started in Thursday’s home win against Barnsley.

“Obviously, I think this. I think everything linked with me, right now, it’s not the moment to talk about this.

“It’s a moment to say thanks to our players. To give this achievement to our supporters. Say thanks to the club and the authority for all they allow us to do.”

When Bielsa arrived at Elland Road in the summer of 2018 his contract gave Leeds the option of extending it at the end of each season for the following three years.

The 64-year-old’s future has been one of the main topics of debate among joyous Leeds fans since West Brom’s defeat at Huddersfield on Friday sealed their club’s promotion.

Leeds’ first trophy success since 1992 is also a rare piece of silverware for Bielsa, who won Olympic gold with Argentina in 2004 and a league title with Newell’s Old Boys in 1991.

“Of course the trophy makes me happy, but I’ve worked in football for 35 years and one title doesn’t change a lot,” Bielsa said.

“It really makes me happy. It’s the fact I did it with this group of players across two years. More than the capacity of this experience. Promotion was the capacity of our players.

“We played a lot of matches in pre-season with around 15 players. The capacity of the group solved every situation that happened. The prize has to be for the players.”

Those players resumed their party celebrations after an 11th win in 13 games lifted them up to 90 points at the top of the table.

Derby are 12th, nine points adrift of the play-off places after a fourth straight defeat and manager Phillip Cocu said the division’s leading teams had highlighted his own side’s weaknesses in recent weeks.

“In many games against top teams we showed we don’t have enough quality to get it home,” Cocu said.

The Rams have lost to West Brom, Brentford and play-off hopefuls Cardiff in their previous three games and Cocu said he hoped to strengthen his squad before the start of next season.

“We know we have a lot of work ahead of us towards next season to make sure – depending on the possibilities, of course, financially at the club – we get some new fresh blood and quality in to support the senior players, but also the youngsters,” Cocu added.