Steve Spooner urges Birmingham to give everything to secure survival 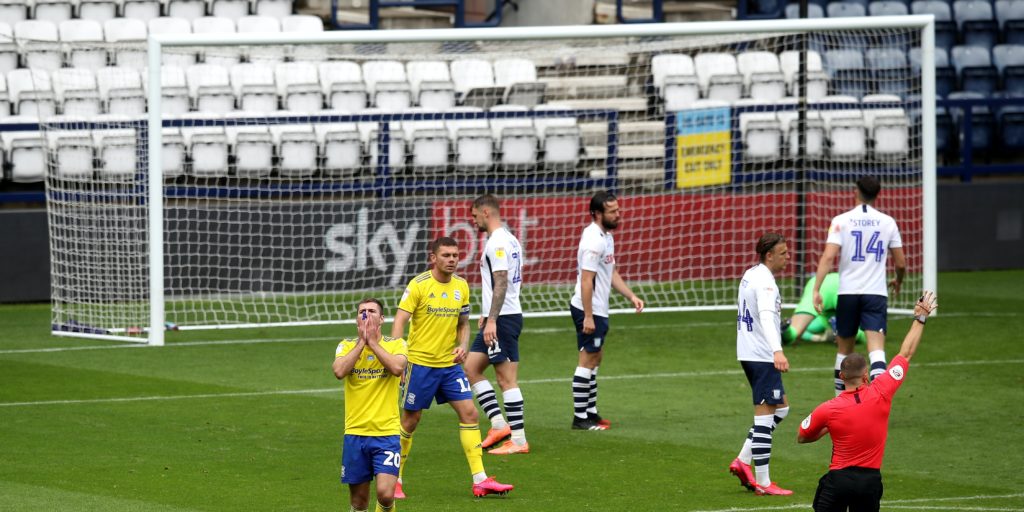 Blues are only two points above the bottom three.

Birmingham caretaker manager Steve Spooner has pleaded with his players to regain focus for Wednesday’s clash with Derby after a 2-0 loss at Preston left them in relegation danger.

Goals from Patrick Bauer and Brad Potts extended the Blues’ winless streak to 13 league games and they now sit just two points above the bottom three ahead of the final day of the season.

Birmingham could be saved by Wigan’s 12-point penalty for entering administration, but Spooner says his side need to take care of business themselves.

“We’ve got to go into next week with all guns blazing now,” he said.

“If the players can’t get up for that one then there really is no hope.

“We can’t be concerned about what the EFL are going to do about the points deductions elsewhere, we’ve got to sort this situation out ourselves.

“These players have to go into the Derby game focused on doing their own job. There’s pride at stake for every single one of them.”

Birmingham, who sacked manager Pep Clotet nine days ago, created chances at Deepdale but the hosts were clinical when it mattered, with Bauer volleying in from a corner and Potts’ low shot earning them the points.

“We were well in this game, but then to concede a goal like that so close to half-time – well, as I say, it’s just the same old, same old.

“We can’t be responsible for what players do. We work on things on the training ground through the week, but then we don’t learn.

“It’s just a symptom of what’s been happening here far too often and for far too long.”

It was a bittersweet afternoon for Preston, who are now out of the play-off race thanks to Cardiff’s win at Middlesbrough.

This was their first home win since February but manager Alex Neil insists the Lilywhites are punching above their weight in the Championship.

“It’s disappointing we’ve not made the top six,” he said.

“It’s painful, we could have got to the play-offs or got promotion, but maybe we’ve sold too many important players over the course of the past couple of seasons, players who could maybe have got us the goals we needed.

“But hey, this group of players have given me everything this season.

“Yes, we’ve come up short in the end, but don’t forget we’ve got one of the smallest playing budgets in the division.

“Just take a look at some of the teams we’re above in the table tonight. We are where we are, but I do think expectation has shifted massively since I’ve been here.”