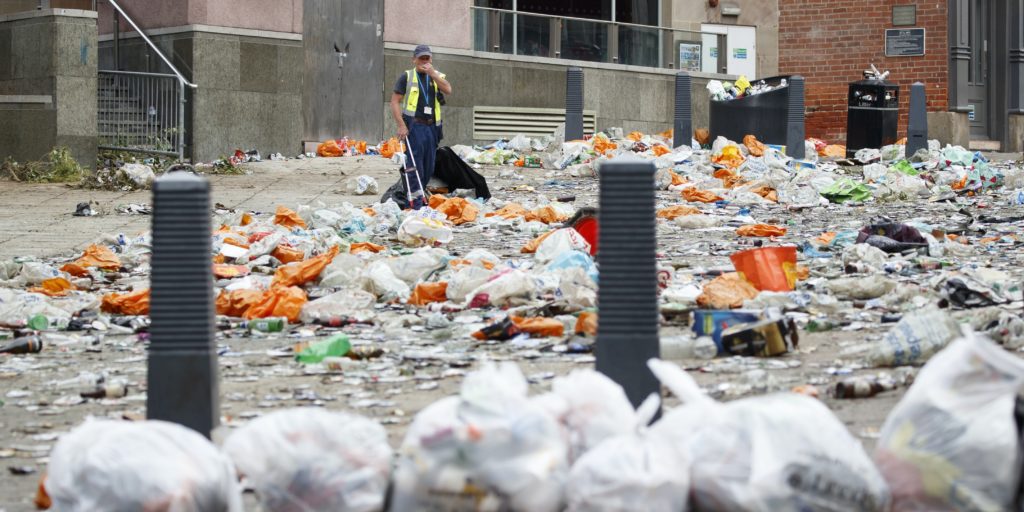 The club’s fans were celebrating promotion back to the Premier League in the city centre.

A police officer was seriously injured and a number of others hurt as thousands of people gathered to celebrate Leeds winning the Championship.

A huge clean-up operation was under way in Leeds on Monday morning after an estimated 7,000 people gathered to mark the club’s return to the Premier League after 16 years, leaving a sea of broken glass in a city centre square.

West Yorkshire Police said a female officer was hit by a bottle and taken to hospital with serious head injuries.

A number of other officers were also hurt along with members of the public as nine people were arrested, the force said.

Temporary assistant chief constable Oz Khan said: “Throughout the weekend, fans have gathered across Leeds to celebrate the promotion of Leeds United into the Premier League.

“We have continued to impress upon fans the importance of the Covid-19 government guidance and our approach has primarily remained as one of engagement and encouragement.

“On Sunday, almost 7,000 people gathered in Millennium Square in Leeds.

“Whilst the vast majority of fans were enjoying themselves and celebrating, there were a small minority of people who began to throw bottles at police officers.

“A female officer suffered a serious head injury and was taken to hospital for treatment, a number of other officers suffered minor injuries and a further 15 members of the public were injured.”

Mr Khan said officers were deployed to Millennium Square at noon and began to disperse the crowds in the evening.

He said the area was cleared by 11.55pm, with nine people arrested for public order offences.

The officer said: “The safety of fans and the wider public is our primary concern.

“Violence towards police officers will not be tolerated and we deployed an appropriate police response to ensure that the festivities concluded safely.

“It is important to remind the public that we must not lose sight of the fact that Covid-19 is still with us and that large gatherings are still not permitted.”

Millennium Square was left strewn with discarded rubbish and broken glass and a large-scale clear-up operation began on Monday morning.

And there are fears there may be similar scenes at the last game of season against Charlton on Wednesday.

During a virtual press conference on Monday, Leeds chairman Andrea Radrizzani was asked if he had a message for fans.

Radrizzani said: “We need to be responsible. Everybody wishes to get together and celebrate and we would love to open the stadium soon.

“But if we’re not following the rules and we take this superficially this might cause more cases, more problems and then we might have to postpone what we want, which is to be back at Elland Road as soon as possible.

“So I really invite them to be more cautious than they’ve shown in the last 24 hours. I think what I’ve seen is not responsible at all.”