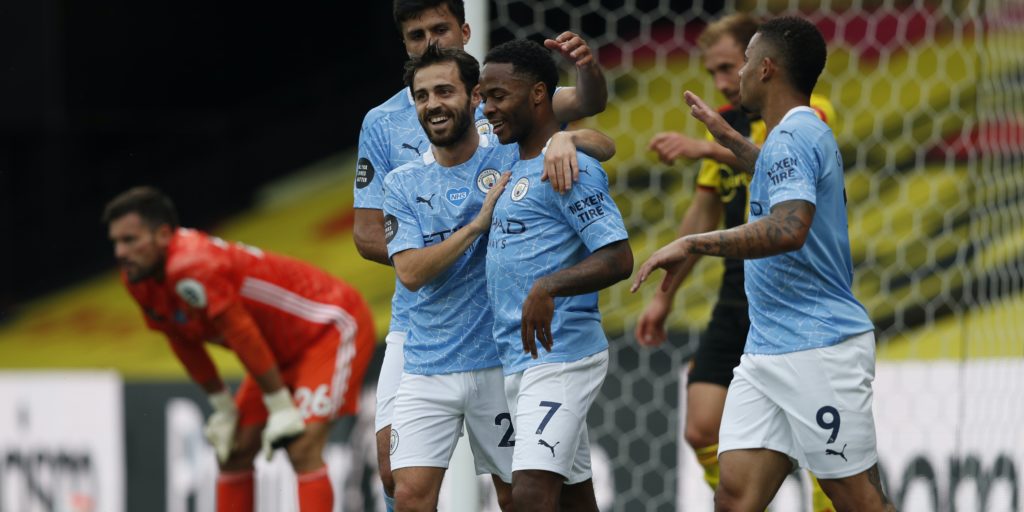 Manchester City returned to form and increased Watford’s relegation fears with a 4-0 win at Vicarage Road after Raheem Sterling hit a brace.

Phil Foden and Aymeric Laporte added further efforts in the second half to make it another miserable fixture for the Hornets against City, but it was a welcome result for 19th-placed Bournemouth who live to fight another day.

Watford’s interim head coach Hayden Mullins now knows they may need a positive result at Arsenal on Sunday to ensure the hard work done by Nigel Pearson – sacked last weekend – does not go to waste.

City immediately pinned the hosts back at Vicarage Road, but the first opportunity of the evening went to the Hornets with 11 on the clock.

Adrian Mariappa’s long throw was only partially cleared by Joao Cancelo and Will Hughes was first to the loose ball and yet snatched at his effort to drag well wide.

The visitors responded immediately and Ben Foster produced a wonderful save to tip wide Rodri’s deflected effort from long range.

Watford made it to the drinks breaks without conceding; progress after they had been 5-0 down after 18 minutes at the Etihad in September.

The deadlock was eventually broken with 31 played by Sterling, who was an unused substitute when these sides last did battle.

Foden’s overhit cross was rescued by Kyle Walker on the right and although his centre looked out of reach, Sterling trapped the ball with precision and smashed into the top corner to leave Foster with no chance.

Once again the Hornets had conceded the opener – the ninth game in a row where they had shipped the first goal.

And nine minutes later it was 2-0 with the floodgates well and truly open despite the best efforts of Foster.

Sterling found space in the area and this time was clipped by Hughes, with referee Michael Oliver pointing to the spot.

Despite Kevin De Bruyne being on the pitch, the England international took responsibility and even though Foster made a fantastic save, Sterling was first to the loose ball and tapped home for his 29th goal of the season.

Craig Dawson tested Ederson with a header in first-half stoppage time but it was routine for the Brazilian and unfortunately for the hosts City showed no signs of slowing down after the break.

Foster denied Gabriel Jesus before Mariappa appeared to block Bernardo Silva’s shot with his hands a minute into the second period.

It was not to matter for City though, with Foden volleying in with 62 played after Sterling was denied his hat-trick by Watford’s number one.

The Belgian’s free-kick was headed home by Laporte at the back post to give City’s captain for the night assist number 19 of the top-flight campaign.

De Bruyne tried to move level with Henry’s record of 20 from the 2002-03 term during the final exchanges at Vicarage Road, but Watford managed to prevent any more damage to their goal difference.

Nevertheless it was a bad night for the Hornets, who head to Arsenal with relegation still a possibility.