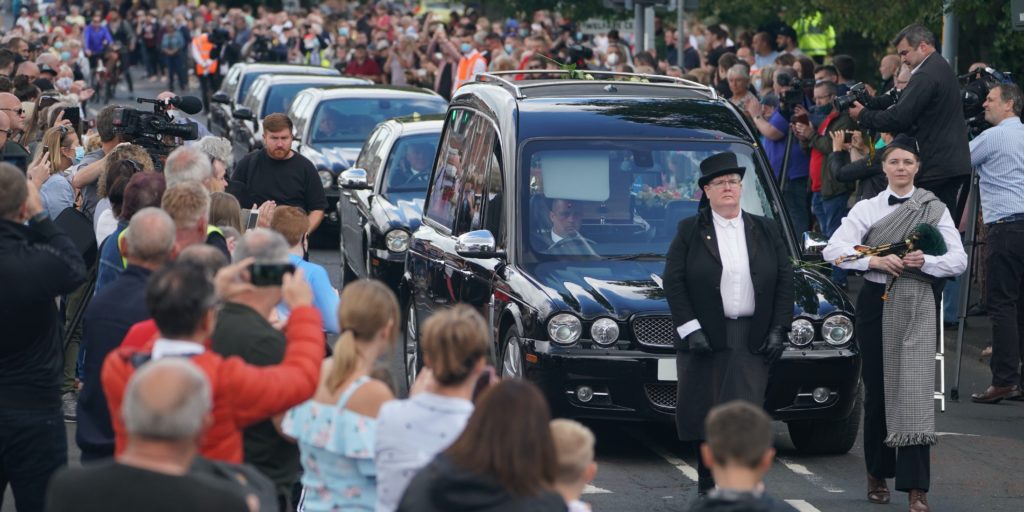 The England World Cup winner and former Republic of Ireland manager died earlier this month at the age of 85.

The former England centre-back, who made 773 appearances for Leeds between 1953 and 1973 and managed the Republic of Ireland to unprecedented heights, died earlier in July at the age of 85.

And Ashington came to a standstill as the funeral cortege made its way through the former mining community.

Fans wearing Leeds shirts, Newcastle tops, Ireland strips and replica kits from his local side Ashington mingled together, waiting for a chance to pay their final respects to a local hero.

Applause and cheers broke out in honour of Charlton, who never forgot his roots and lived in the north-east.

Well-wishers threw flowers on the hearse as it passed slowly through the town where he and his younger brother Sir Bobby honed their football skills.

A floral tribute from Sir Bobby, 82, and his wife Norma was placed next to the coffin, saying: ‘Rest in peace Jack, sending our deepest sympathy’, but he was not seen travelling through Ashington.

The procession slowed as it passed close to 114 Beatrice Street, where the Charltons played for countless hours in the back lane, and the park where ‘Big Jack’ learned the art of defending.

In Ireland – the country he led to the 1988 European Championship and the 1990 and 1994 World Cups – Charlton was also being remembered.

The Football Association of Ireland had called on all Republic fans to wear green in memory of Charlton.

Irishman Patrick Wilson was stood in Ashington town centre with his family to pay his respects.

The 68-year-old civil engineer, who is originally from Rahugh, Co Westmeath, but now lives in Longframlington, Northumberland, said: “We look at him as a humble person, a man for the people.

“He was a simple sort of person with no airs or graces. Everyone was the same in Jack’s eyes.”

Charlton’s coffin was draped by England and Republic of Ireland scarves.

Floral tributes in the hearse included a football and a red England shirt with ‘Jackie 5’ on it.

The cortege stopped in Ashington and the pallbearer, accompanied by a Northumberland piper, walked in front of the cars for a couple of hundred yards.

Former England cricketer Steve Harmison, also from Ashington, was among those paying his respects with all generations present.

Peter Mather, a 68-year-old semi-retired bricklayer, stood with a sign saying ‘Howay Wor Jack’ and said: “I never normally wear a cap but I’ve got one on today out of respect to Jack.”

A young boy nearby had ‘Wor 9 Jack’ painted on his back and others held up ‘RIP Jack’ signs with England flags on them.

Leeds fan Kevin Coe, 51, and his son Ellis, six, were on the route of the funeral procession.

Referring to a 1971 documentary showing Charlton’s home life in Ashington, Coe said: “He just seems to have been a regular guy.

“He was still going out to the clubs, involved in whippet racing. It sums up this area.”

Peter Cowans, 64, decorated the outside of his Ashington home with flags in honour of Charlton.

The former policeman said: “He was a lovely fella, not just a football legend, but a real gentleman too.”

Charlton was a constant of the successful Don Revie Leeds sides of the 1960s and early 1970s, but he was almost 30 before making his England debut in 1965.

However, he timed his arrival on the international scene perfectly and was part of the only England side to win the World Cup, when West Germany were beaten 4-2 at Wembley in 1966.

Charlton later managed Middlesbrough, Sheffield Wednesday and Newcastle, but it was with the the Republic that he enjoyed his greatest success and became a national hero for the second time.

Charlton led them to Euro 1988 in West Germany before the Republic qualified for their first World Cup in Italy two years later.

The Republic reached the quarter-finals at Italia 90 and Charlton led them to a second World Cup in the United States four years later.

Charlton remained a hugely popular figure in his retirement, always staying close to his north-east roots.

After his death, his family said in a statement: “He was a thoroughly honest, kind, funny and genuine man who always had time for people.

“His loss will leave a huge hole in all our lives but we are thankful for a lifetime of happy memories.”

A private family service was held at Newcastle’s West Road Crematorium on Tuesday afternoon with a limited number of mourners due to the Covid-19 restrictions.