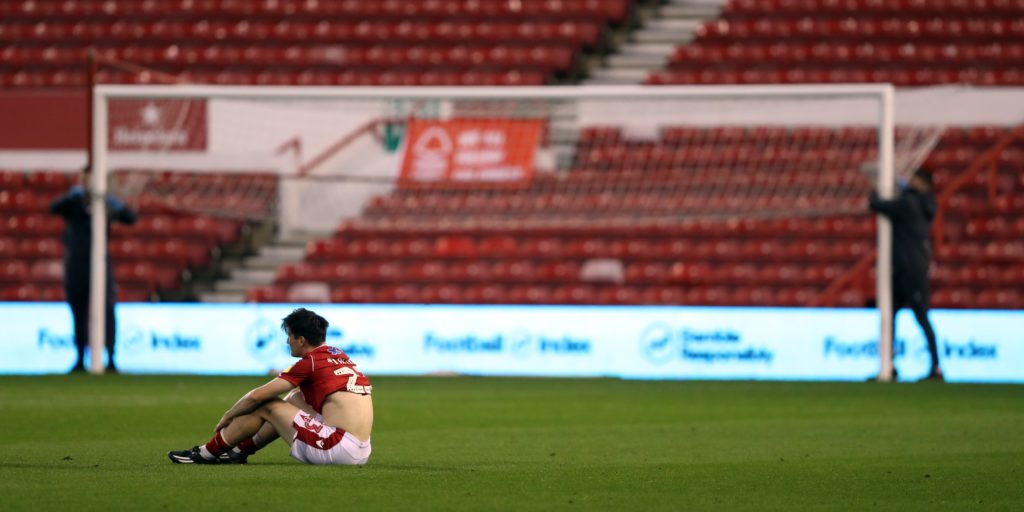 The Reds slipped out of the promotion picture following a heavy defeat to Stoke as Swansea took their place.

The Reds, in the top six for much of the season, capitulated against Stoke at the City Ground and missed out on the play-offs.

Lamouchi’s team went into the final round of fixtures firmly in the driving seat as his side, Cardiff and Swansea all tried to cement a top-six finish.

Forest, without a play-off campaign since 2010/11, could even afford to lose as long as there was not a dramatic swing with Swansea. However, that is exactly what happened.

Danny Batth put Stoke in front after 19 minutes but Forest equalised through Tobias Figueiredo just after the hour.

Goals from James McClean, Lee Gregory and an own goal by Joia Nuno Da Costa saw Forest slump to a 4-1 defeat while Swansea won by the same scoreline at Reading and leapfrogged Lamouchi’s team in dramatic fashion.

“Looking back at the game I can’t explain what has happened. For 20 minutes before the end we have lost control.

“After what we have done for 12-13 months, it is unacceptable. I am so sorry that we were short tonight. I can’t find the words for what has happened. The true Forest is out of the play-offs and it is our fault.

“Probably we were tired, and to play without any fans at the City Ground is difficult for sure, but I can’t accept it as a reason. It is unacceptable.

“We have missed many many opportunities to secure the play-offs and we are where we are now for our own fault – nothing else. I am really, really upset.”

It will be a huge disappointment for Forest to finish the season on a six-game winless run but Stoke end the campaign with 56
points – a point more than they won last season – and that is some achievement considering the Potters had eight from 15 games when Michael O’Neill was appointed as manager in November.

The Northern Irishman said: “It was a great performance. We knew it would be a difficult game as Forest still had a lot to play for, and you are not going to come here and not have to defend.

“Our reaction after they scored was terrific. We haven’t won enough points away from home this season and that is something we need to address going forward. To react as we did and go on and win 4-1 was very pleasing.

“I have some sympathy for Forest, they have been in the play-off positions for much of the season. But we had to look after ourselves and we can take a lot from tonight’s game and it gives us something to build on going into next season.

“We’ve finished the season well but we are 16th so we are not getting carried away. We have to make sure when next season commences we start on the front foot as we were slow away this season and it handicapped us.”