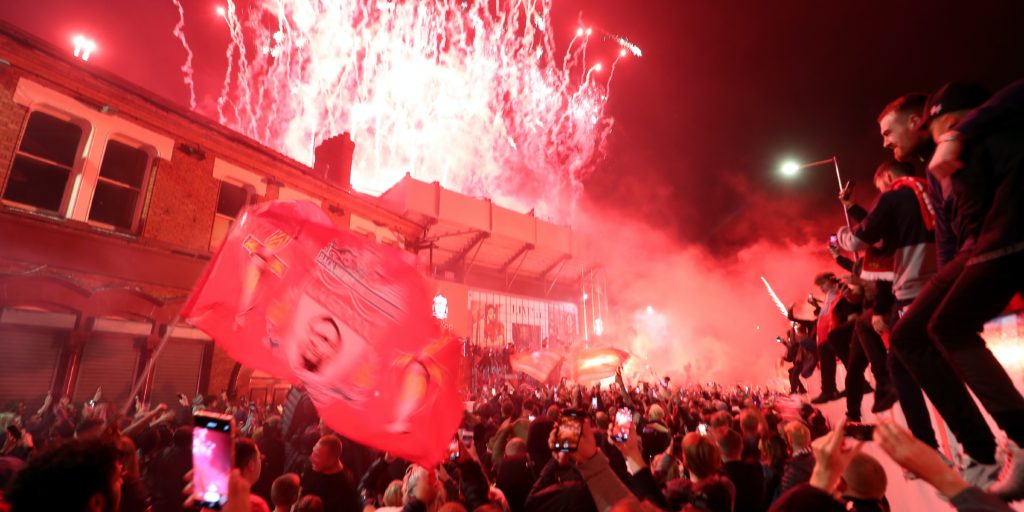 Thousands of fans gathered outside the clubs’ stadiums.

Arrests were made in Liverpool and Leeds as thousands of fans gathered outside stadiums to celebrate their clubs’ title triumphs on Wednesday despite warnings to stay at home.

Merseyside Police introduced a 48-hour dispersal zone around Anfield during Liverpool’s victory over Chelsea as fans congregated outside the Kop on the night the club were presented with the Premier League trophy.

A heavy police presence was also in force as the Reds celebrated their first title in 30 years and it was later confirmed nine arrests were made.

In Leeds, where United received the Championship trophy after a victory over Charlton, four arrests were made outside Elland Road. One police officer suffered minor injuries as thousands celebrated the club’s return to the top flight after a 16-year absence.

Ahead of the match in Liverpool, the club, council, police and supporters’ group Spirit of Shankly had urged people to celebrate from their homes amid ongoing Covid-19 restrictions.

Former player and manager Sir Kenny Dalglish tweeted: “Can everyone please respect the guidelines and enjoy the moment. This is a dress rehearsal for when we can all celebrate together safely.”

There were no fans inside the ground as the trophy presentation was made but, outside, crowds erupted into huge cheers on Walton Breck Road as fireworks went off over Anfield.

Fireworks were also set off in the street, along with flares, and fans waved flags and sang as they celebrated into the early hours.

Assistant chief constable Natalie Perischine, from Merseyside Police, said: “Officers made a total of nine arrests outside Anfield for affray, assault, people who were drunk and disorderly and drug-driving. The vast majority of the crowd were good-natured and had dispersed by 2am.

“Thankfully we didn’t see the sort of incidents of disorder and criminal damage we saw at the Pier Head on June 27, the investigation into which has seen more than 20 arrests made to date.”

Police officers, who stood in cordons across the road, took flares from some fans but did not stop them joining the crowd.

Liverpool City Council said teams had been in the area early on Thursday morning to clear up the streets and tweeted a video showing discarded cans and bottles left in the area.

Perischine added: “Although the numbers who gathered last night could have been significantly higher, it is still disappointing that people did not listen to requests from ourselves, Liverpool Football Club and Liverpool City Council not to gather in large numbers because of the risks still posed by Covid-19.”

The issued a statement echoing those sentiments.

It read: “Liverpool Football Club would like to thank those supporters who stayed at home to celebrate the team lifting the trophy last night, protecting their loved ones and our city from the ever-present threat of this pandemic.

“We are, however, disappointed with the scenes outside Anfield last night and that more supporters did not heed the celebrate-at-home advice.

“As we have said before, when it is safe to do so we will celebrate, until then protecting our city is the priority.”

Leeds defended their decision to allow players to appear on an open-top bus with the Championship trophy, saying it was hoped that would hasten crowd dispersal.

A club spokesman said: “Following consultation with the SAG (Safety Advisory Group) and (Leeds City) Council, Leeds United arranged for a bus to be parked outside the East Stand reception as a contingency to assist dispersal should a crowd congregate at Elland Road, despite a month-long campaign from the club and supporter groups to encourage supporters to stay at home.

“The safety group believed that a brief appearance from the players with the Championship trophy would help to signal an end to proceedings, encouraging fans to head home safely.”

Superintendent Jackie Marsh, of Leeds District Police, said “One officer received a minor injury which did not require hospital treatment.

“While most of those who gathered did so with good intentions, there were some missiles thrown which resulted in officers having to wear protective equipment.”