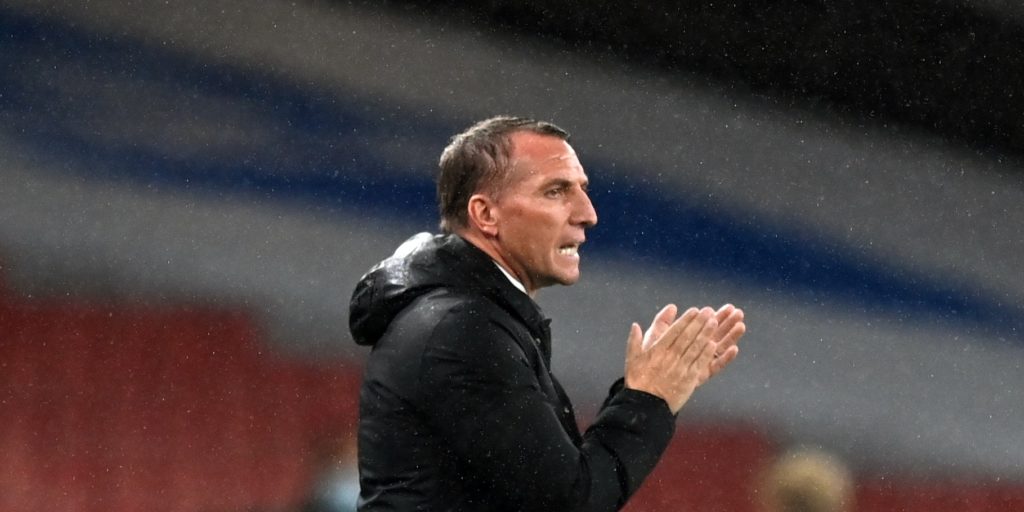 Leicester are a point outside the top four heading into the final round of games.

Leicester boss Brendan Rodgers has dismissed any suggestions that missing out on the Champions League would be a failure.

They are fifth, a point behind United and Chelsea, in the race for the top four having already earned a Europa League place for next season.

Leicester, shock champions four years ago, have again threatened to upset the established order and Rodgers insisted wherever they finish, the Foxes have achieved most of their targets this term.

He said: “The six targets we had – two of those was to get to domestic finals, one was semi-final, one was quarter-final, so we just fell short in those but met all of the other performance goals, in terms of reaching European football and improving our goalscoring.

“Apart from those two (failure to get to finals), the other goals we have achieved, and now we’ve a chance to…this is virtually like a barrier-breaking goal, a goal that will get us into the Champions League.

“It wasn’t really something we spoke about at the beginning of the season because naturally, where the club had been these last few seasons, we wanted to try step-by-step to arrive there.”

But Rodgers insisted he has no regrets with the way the season has gone, despite the Foxes losing the 14-point lead they held over United in January.

“No. I’ve always said that boat has sailed. The league is over 38 games and people were having us in the Champions League after 20 games. You have to go right the way to the end,” he said.

“There’ll be disappointment if we don’t make it but that would whet the appetite for next season. We were in a good position but you’ve got to sustain it. It also shows you the big improvements this team still has to make.

“I could go over the whole season and look at points we should have won and could have won, but every team can do that.

“We dropped points and we need to be better in that and next year our mentality is one of the areas that needs to improve to sustain the run.”

The Foxes are without James Maddison and Ben Chilwell while Caglar Soyuncu is banned.

They have won two of their eight league games since returning from lockdown, while United are unbeaten in their last 13 Premier League outings, leaving Leicester as the underdogs.

Rodgers added: “Naturally everyone will look at this game and the expectancy is for the so-called big team to be in there.

“If you analyse budgets and everything else, we should actually be nowhere near the position of Manchester United. That’s the reality.

“The game itself and how it’s set up shows you how well we’ve done to be competing at that level.”