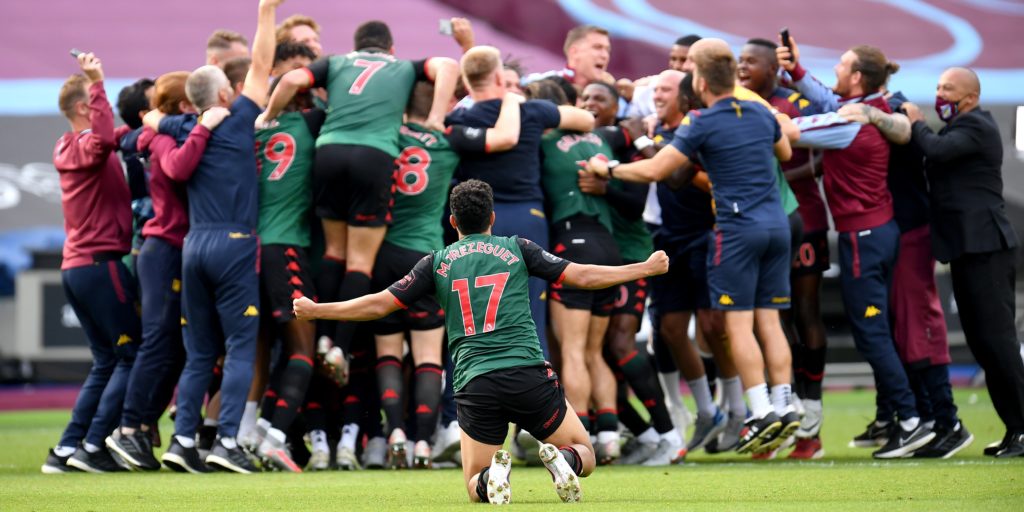 A four-match unbeaten run to finish the season saw Villa keep their head above water as Bournemouth and Watford were relegated.

Jack Grealish took centre stage as Aston Villa escaped relegation by the skin of their teeth after a 1-1 draw at West Ham.

The Villa captain, whose future at his boyhood club remains uncertain, came up with the goal which should have settled their nerves six minutes from the end.

However, moments later Grealish deflected in Andriy Yarmolenko’s shot to leave the visitors hanging on by a thread again, knowing another West Ham goal would send them down with rivals Bournemouth beating Everton.

Yet Villa, who were seven points from safety heading into their game against Crystal Palace on July 12, held on to complete their version of the great escape to stay up by a single point.

The four-match unbeaten run Dean Smith’s men managed to end the season with, including wins over Crystal Palace and Arsenal, kept their heads above water while the Cherries and Watford joined Norwich through the trapdoor.

West Ham should have provided relatively compliant opposition having guaranteed their own safety a couple of matches ago.

Yet Villa hearts were in their mouths after 12 minutes when Michail Antonio burst clean through as he latched onto Issa Diop’s long ball.

The forward had scored eight goals in his previous six matches, but this time his finishing deserted him as he scuffed his volley wide.

The visitors got their first sight of goal when Mbwana Samatta rose to meet Frederic Guilbert’s cross, but his header flew straight at Lukasz Fabianski.

Grealish should have put Villa ahead just before half-time when John McGinn’s ball across the pitch was helped on by Samatta to the left-hand side of the penalty area.

Grealish shaped to curl the ball around Fabianski but could only clip his effort straight at the Polish goalkeeper.

The news that Bournemouth were winning must have been relayed to the Villa players at half-time, because they emerged with far greater urgency.

Samatta missed his kick in front of goal from Conor Hourihane’s cross and McGinn’s follow-up was hacked clear by Ben Johnson.

But Villa soon retreated and West Ham could have had a penalty when Mark Noble was tripped by Matt Targett, before Sebastien Haller and Tomas Soucek were off target with headers.

However, when John McGinn found Grealish on the left of the area, he managed to wriggle away from two men and fire a powerful shot past Fabianski.

When Yarmolenko’s long-range shot looped in off Grealish, it suddenly looked like it might not be their day after all.

But five minutes of stoppage time were safely negotiated and a point ultimately proved enough, meaning the celebrations could begin.